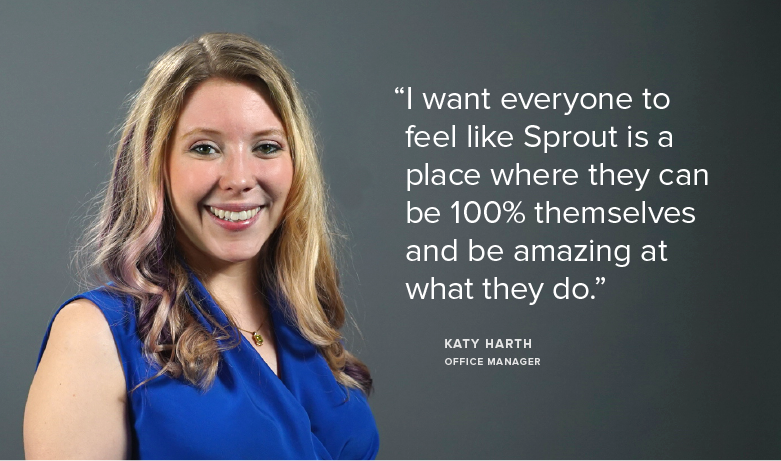 As the Office Manager here at Sprout, Katy has her finger on the pulse of the office and keeps all of our operations running smoothly. From welcoming visitors to knowing everyone’s name to maintaining our ridiculously well-stocked snack room and fridges of LaCroix, Katy is one of the operations team managers who keep our space and team in top shape.

Katy’s many talents aren’t only seen in the Sprout office—she’s also a singer, new runner and former nationally ranked Bernese Mountain Dog handler. Watch the video and read on to learn how she got to Sprout, what was extra special about her first day and more.

Tell me about your career path so far and how you got to Sprout.

Before I got to Sprout, I was at Lawrence University. I studied theater arts and vocal performance, and at one point I did a show with Julie Cohen (a member of Sprout’s operations team). A few months later, she posted on Facebook that Sprout was looking for a receptionist. I talked to her and she really encouraged me to apply, so I came in and met the team, and I got a call that night. If you had told me three years ago that I’d be in this job, I wouldn’t have believed it, but the rest is history!

So you started as Sprout’s first receptionist, then became office manager. Tell me about that transition.

I was Sprout’s first receptionist, so I was kind of cultivating the role as I went. I took on various projects and kept asking for more, but being promoted to office manager was still a big transition. Rachael (Sprout’s VP of Operations) put a huge amount of trust in me. I wasn’t sure I could do it but everyone believed in me and was really encouraging.

How would you describe your role now?

No day is the same. I have to be a generalist and know a little about a lot of things. If I had to sum up my job, I would say that I want everyone to feel like Sprout is a place where they can be 100% themselves and be amazing at what they do.

There’s a lot of thought, attention and detail that goes into everything we do here. I try to incorporate that into my role every day. One thing I like about my job is surprising people with little things—somebody will mention that they love a certain kind of almond milk and when I put it in the fridge the next day, they get really excited.

I’m reminded of this over and over again: happy people are far more productive. I love the people that I work with, and I love that at Sprout, the culture is, “we want you to be happy.”

This picture says it all because this crew does it all. Say hi to the ops team! Here they are on a lovely outing at @thesocialtable. #TeamSprout #SproutandAbout

Do you have a favorite Sprout memory?

I was employee number 100, so on my first day, we had champagne.

My reaction was, “Is this what it’s like everyday?”

When you aren’t toasting with champagne and making our office amazing, what do you like to do?

One thing I’ve been doing for years is showing dogs, primarily Bernese Mountain Dogs. I’ve been doing it since I was 10 and showed competitively to the point where I was nationally ranked as a junior handler. Now I don’t do it as often, but I’m still involved. I’m on the board for the Bernese Mountain Dog club of Northeastern Illinois. I’m the youngest by two decades, so it’s a lot of fun. I’m hoping to get more involved and make our club stronger.

That sounds fascinating. What has that taught you?

I definitely learned patience and dedication and learning how to think on my feet in that job. Those are some of the qualities that have really helped me at work, too.

Aren’t you also on this year’s Ragnar Relay team?

Yes! I joined Sprout’s Ragnar team for the first time this year. We’re running the Bourbon Chase in Kentucky later this month.

Go Sprout go! 12 fearless runners are representing #TeamSprout at the Napa Valley @ragnarrelay. Follow along at #SproutRagnar, and give them a cheer! #Ragnar #RagnarNapa

I’m running Friday and Saturday, and then I fly back Sunday to sing at a country club for a family friend’s birthday party. We’re putting together a medley of songs that were important to her throughout her life. I’m starting to want to get back into singing, so that will be fun.

So much fun! What’s your favorite place to run or get outdoors in the city?

I love walking around the city and my commute on the Brown Line. You get a really great view of the skyline as you come in in the morning. All the parks around the city are wonderful—Winnemac Park is probably my favorite right now. They have walking paths and patches dedicated to native plants, and it’s near a high school with a track so I like to run there.

Do you have any favorite apps, for running or otherwise?

I love Quartz. It’s an interactive news app, almost like a messaging app. You can ask questions about topics or stories, and it’s a quick way to get bite-sized news and stay a bit more present and aware.

Is there anything I haven’t asked you that you want to share?

Yes! Sprout’s moving to a new office space soon; it’s going to be amazing. I can’t say too much, but I’m excited to have a more open space and to be able to more efficiently take care of it. We’ve got some great stuff planned to make life at Sprout even better, so I’m very, very excited.