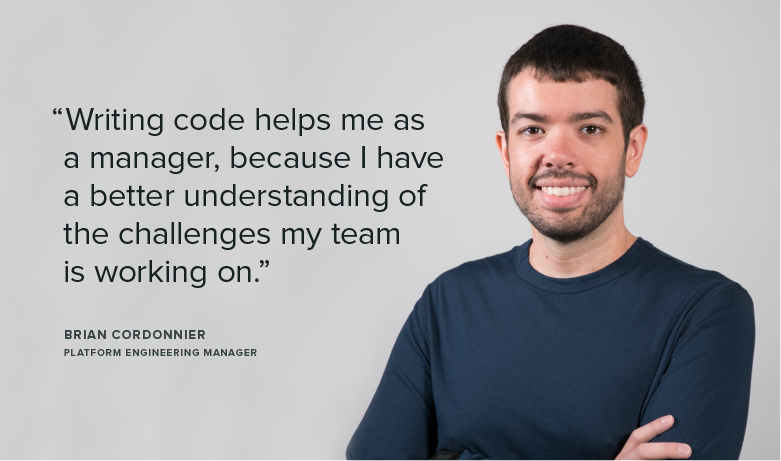 There’s a mural on the wall in the main area of Sprout Social‘s new office space with the words “Always Be Growing” painted on a Sprout-green background. There’s no simpler way to sum up the priority we place on growth—for every member of Team Sprout, for our products and for our company as a whole.

Brian Cordonnier, a Platform Engineering Manager on Sprout’s Publishing Squad, embodies this commitment both in his work at Sprout and his hobbies outside of the office. Brian started at Sprout as a Software Engineer and was promoted to Engineering Manager, a role in which he’s added ‘leading a Squad’ to his coding repertoire. In this Meet Team Sprout interview, we talked to Brian about what it means to be a good manager, the coolest thing he’s 3D-printed lately and his advice for anyone joining our team.

How did you get into engineering and into your role at Sprout?

I’ve liked computers my whole life, and I started very early on playing some King’s Quest on my Apple 2GS at home. I’ve been hooked ever since. I took some programming classes in high school and went to the University of Chicago, where I was a computer science and math major.

I worked at a company that made finance software for five and half years. After a while I wanted to mix it up, and I found Sprout. It was completely different, and Sprout had pretty interesting coding challenges in the backend. The more I went through the interview process, the more I saw that was true, and that’s what was most interesting to me.

You started as a Software Engineer, and you’re now an Engineering Manager. What was that transition like for you?

It’s definitely been a learning experience. Sprout tries to have managers remain individual contributors. I write less code than before, but I was writing code right before I came over here. Writing code helps me as a manager, because I have a better understanding of the challenges my team is working on. It keeps me relevant and helps me manage better.

What are the qualities you think make a good manager?

You have to be ready to jump in to do anything any time. It’s also important to be able to bridge the technical and the people aspects. I work a lot with Product Managers and people who aren’t strictly on the technical side, so being able to see both sides of the equation helps a lot. At the end of the day, we’re a customer product. We have to keep in mind how people are actually using our product and what it looks and feels like to them.

So beyond being a part of the engineering team, you’re on the Publishing Squad. You all have your own unique culture and traditions. Tell me about that.

It’s important to like coming to work and like the people you’re working with, and I think the easiest way to do that is to just have fun and keep things light. We decorate for the holidays; this year I strung a bunch of R2D2 lights across my cube because “Star Wars” is the best. We play music for the whole squad every Friday—that kind of thing.

Don’t you have a mascot too?

We do! He’s been lovingly named Dr. Polonius, the Publishing Pig. Last year we went a little nuts with Christmas decorations and he was part of that, but now he’s on my desk year-round. It makes me very easy to find: I can tell people to meet me by the giant pig.

In addition to all the fun stuff that Pub Squad does, what are some of the most rewarding and challenging aspects of your role?

One of the things that it’s great here at Sprout which you don’t always get in engineering jobs is immediate return from the customer. It’s equal parts amazing and terrifying that as soon as I deploy a new product, it’s out in front of our audience. We will have people Tweeting about a new feature within 90 seconds of launching.

Sprout is a really nice intersection between a really interesting technical challenges and an actual customer facing product. I like to say that we have every CS 101 big problem at Sprout, from working on a high throughput, low latency model on the Publishing Squad to covering all of the big data cliches while handling terrabytes of data daily on the Reporting Squad. It’s very rare that you get all of those interesting challenges and something that customers are actually using as soon as you deploy.

So as well as what you’re working on at Sprout, you’ve shared a lot of your hobbies at Lightning Lunches. Tell me about your presentations.

Yeah! Lightning Lunches are basically a time when we all grab our lunches and anyone is welcome to give a quick topic on whatever subject they want. I’ve done one on the X-Wing Miniatures game from “Star Wars” where you play as miniatures on a three foot by three foot playing area. I’ve also done one on 3D printing, one on Dungeons and Dragons, one on blacksmithing.

I play a lot of video games, so I made a Fallout coaster that looks like a vault door. I put the model online so other people can copy it—I’m trying to get better at 3D modeling, which I have no experience in. It’s really exciting to start with an idea in my head, spend some time modeling it, and then print out a tangible thing that I created.

It can be really fulfilling to make something physical after focusing on building software all day. Any other ways you unwind?

I cook a lot, and I do a lot of grilling. I’m a big fan of stuffed burgers. We also go out to eat a lot. There’s a place near the University of Chicago called Salonica where I would eat all the time. I like everything from diner food to Alinea, which is arguably one of the best restaurants on the planet.

So other than “get used to Chicago winter,” what advice would you give to someone who’s new to Sprout?

The top thing is to ask questions. Coming to a new job is always hard and it takes awhile to get up to speed, so I try to answer everyone’s questions because I’ve had plenty myself. It’s also important to jump in. For as many books as I read, at the end of the day, I have to actually write the code in order to understand what’s going on.

And last but not least, have fun! If you want to work on something different, move around; try a new squad. We have a lot of different opportunities here so keep trying things until you find one you like.