In October 2018, Google announced that it will be shutting down the consumer version of Google+ owing to insufficient usage. The company announced that it was too challenging to keep maintaining a product that could not meet consumers’ expectations. The initial announcement also stated that Google would complete the Google+ shutdown in 10 months.

This wasn’t too surprising to a lot of social media marketers and experts who had been anticipating the downfall of the platform for a while. Since 2013, Google+ had been experiencing low activity. While there were 1.15 billion registered users, only 359 million of them were active on the platform.

Stone Temple later discovered in 2015 that 90% of valid profiles on Google+ had no content. In other words, most users were not posting anything on the platform even though they had signed up.

After the initial announcement of the Google+ shutdown, Google later discovered that a software update released in November contained a bug. Since this bug was affecting the platform’s Application Programming Interface (API) and some of its users, the company decided to expedite the shutdown.

What this means for you: Next steps to take

What does the Google+ shutdown mean for users like you? How will it affect social media marketers and businesses? But most importantly, what do you need to do to prepare for the shutdown? Let’s take a look.

Step one: Check your profile security

The first thing you’d want to do is make sure that your profile is secure while Google+ is still in the process of shutting down. For this, you can follow the existing steps given by Google to secure your Google+ profile. This involves:

Step two: Save your data from Google+

A lot of Google+ users created a profile just to sync it with the other Google products they’re using such as Gmail. So they never really published posts on the platform or used it to interact with other users. If you’re among these inactive users, you won’t face much loss with the Google+ shutdown.

But if you have shared some posts on the platform or made some valuable connections over the years, you wouldn’t want to lose all this data. Google gives you several options to save out your data, so you’d want to do that before the Google Plus shutdown. Here’s what you can do:

Downloading all your data

You have the option to download all the data from Google+. This will include data from your Circles, Streams and Communities as well as all your +1 data.The process is quite simple. You just need to go to the Download your data page and sign in if necessary. You’ll see that all your available Google+ data has been pre-selected as shown in the screenshot below. 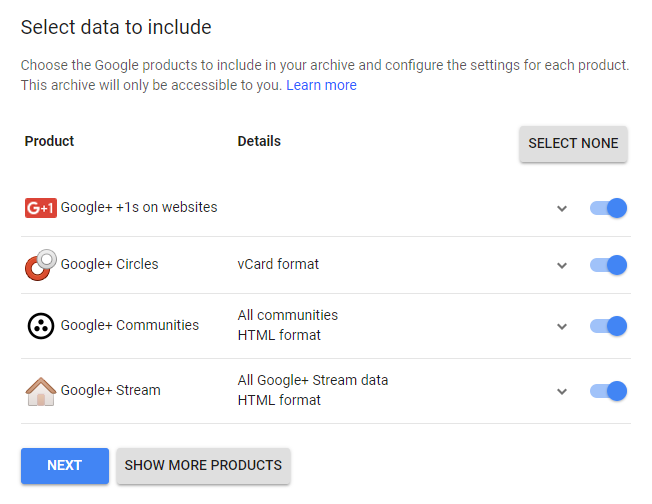 Click on “Next,” and you’ll have the option to choose from different file types, archive sizes and delivery methods. You can have the download link sent to you via email or add all the data to your Google Drive. You can even save it to your Dropbox or your computer’s online storage drive. Select the options that suit you best, then click on “Create Archive” and that’s it. 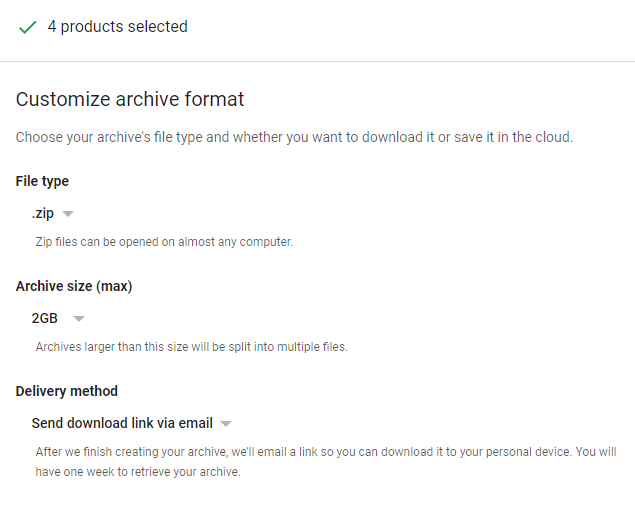 You may not necessarily need to save all your data from Google+. If you only want to download specific data such as your photos, events or posts, you can narrow down your selection. On the first page, you can deselect whichever data you do not want to save. Even under your Google+ Stream data, you can further select specific data to save such as events, posts and photos.

Once you’re done selecting all the data you want to download, you just need to follow the same steps listed above to choose your file type, file size and mode of delivery before selecting “Create Archive.”

As a social media marketer, the next thing you’d want to do before the Google+ shutdown is to update your social strategy. While most social strategies focus on major social media platforms like Facebook, Instagram, Twitter and LinkedIn, some marketers also include Google+ as well.

Even if it doesn’t play a huge role in your overall social strategy, you still need to make the necessary adjustments so you can remain up to date. Here are a few steps you can take to update your social strategy in preparation for the Google+ shutdown:

What the Google+ shutdown means for Sprout Social users

With the Google+ shutdown, Sprout will also have some product changes leading up to the March 7 deadline. Here’s what users need to know and prepare for:

What else to expect

Although Google is planning to shut down Google+ for consumers, enterprise access will remain unaffected. In fact, Google+ for Enterprise will go through a few updates and improvements. While announcing the Google Plus shutdown, the company also announced that there will be new features to cater to the needs of businesses.

The platform has remained a valuable product for enterprise customers since it has helped co-workers engage in internal discussions and provided a secure corporate social network. So the company decided to shift its focus and adapt the platform into an enterprise product. Google will share more information about the new features and updates in the coming months.

Were you expecting the Google+ shutdown all along? Or did it catch you by surprise? Have you made all the necessary preparations? Let us know in the comments below.

Jacqueline Zote: Jacqueline Zote is a professional content writer and editor. Her interests range from pop culture and mythology to content development and social activism. In her free time, she goes on food adventures and writes unrhymed poetry. Her short fiction has appeared in anthologies published by HarperCollins Publishers and Zubaan Books.