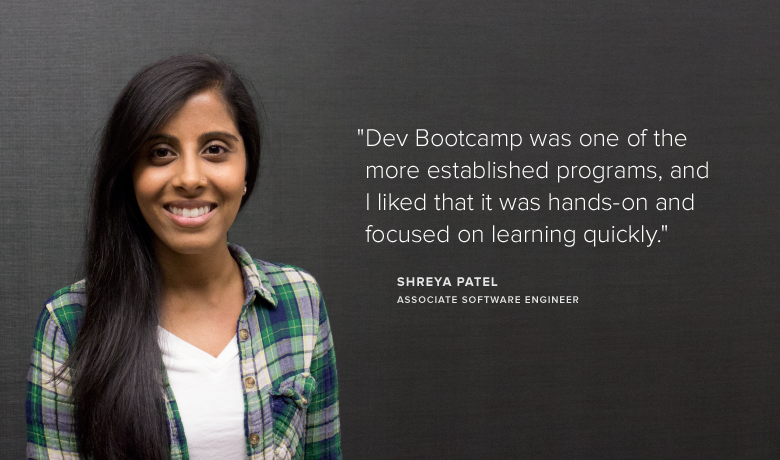 We’re always working hard to improve our app, and behind the scenes, there’s an internal group dedicated to testing each new release. The Software Engineering in Test (SET) Squad creates automated tests that developers can use to ensure that nothing they code breaks an existing part of the app.

Shreya Patel, an Associate Software Engineer, is part of this quickly growing team. After starting her career in healthcare, she pursued her curiosity about technology by enrolling in Dev Bootcamp, an 18-week coding bootcamp here in Chicago. We see coding bootcamps as a great way to begin a career transition: These experiences typically teach students not only how to program, but how to learn and collaborate in a fast-paced environment.

Shreya hit the ground running at Sprout as part of both the SET and Publishing Squads. Read on to learn more about her career path, thoughts on being a woman in the tech industry, and recent adventures in food and travel.

Can you tell us about your career and how you got into engineering?

Before working at Sprout, I was a surgical assistant at a small, private clinic. I worked under a licensed general surgeon helping with small outpatient surgeries. It was very rewarding, but I was curious about tech and development. As the clinic went through the process of transferring all of our paper files to electronic files, we were doing software training with a tech company. That’s where my curiosity spiraled off into a deeper interest in writing software and making web apps that could affect thousands of people.

How did you approach the transition from healthcare to technology?

Just like I did when I was applying to colleges out of high school, I researched and looked at different opportunities. At the time, coding bootcamps were on the rise and popping up all over the country. Dev Bootcamp was one of the more established programs, and I liked that it was hands-on and focused on learning quickly so that you could get out faster and apply your knowledge in the real world.

At first I thought it would be strange that I was coming from healthcare, but on the first day I met other people coming from healthcare as well as law, finance, previous programming and computer science experience and other fields entirely. DBC is 18 weeks total and is focused on hands-on challenges. It’s a collaborative environment—everyone wants to improve, help each other and get to that end goal of learning the core concepts behind each challenge.

After you graduated from the program, what drew you to Sprout?

I connected with Sprout through the Demo Day that Dev Bootcamp hosts at the end of the program. As a brand new developer, it was nice to see that Sprout has a support system in place and is able to support other coding bootcamp grads while encouraging their continued growth. That was a big indicator that this is a good place and a good fit for me.

Which skills from your role in healthcare helped you transition to engineering?

The most important skill is just working with people. In healthcare, you empathize with your patients and with your colleagues. That transfers very well into engineering because of the common mindset that you should write code so that others can understand.

Could you describe a typical day or week on the job?

Because of my role in software engineering in test (SET), the main thing I work on is running automated tests. We built an internal tool that all the developers can use to test the web app that we build. Going through all of the automated tests takes up most of my morning, then I have daily stand-ups for the Publishing Squad and SET.

After lunch, I’m crunching code until five o’clock—it’s basically code review, writing code, code review, writing code. I write code that tests other developers’ code to make sure that as they work on new features in the app, none of their code breaks existing features. We have a parallel process where testing and building occur simultaneously, which allows us to release features faster.

What’s one project you’ve worked on that you’re particularly proud of?

I’ve worked on quite a few projects with the Publishing Squad, but I think message approval was one of the most anticipated projects. Working on this feature and hitting the deadline with my coworkers was an amazing feeling.

At today’s all-hands meeting we celebrated our Publishing Squad, who crushed it with our Message Approval release! Way to “make it so,” Pub Squad! #teamsprout

What motivates you to do your best work?

In healthcare, women are very common at all levels. In engineering, I’m in an environment with very few women. Instead of letting that intimidate me, I feel it motivates me. I want people to know that a female engineer is just as good as a male engineer.

If you could give a Lightning Talk (five minutes on any topic), what would you choose?

I like to think that I’ve become really good at mastering Git and GitHub, tools that we use on our team and on the engineering side. I already give short talks to new people on how to use Git and GitHub, so I would love to give a 5-10 minute Lightning Talk on these tools. That’s what we use to version control all of our code and it essentially drives the workflow for our developers.

Outside of work, how do you like to spend time?

I’m pretty active; I like to run and do strength training. I’m a big soccer fan so I love to watch it and play pickup games with friends. I recently got engaged and my fiancé and I go out to eat all the time—we have an ongoing list of all the restaurants we’ve been to since we started dating.

I’ve heard a lot about Pub Royale in Wicker Park. It’s like a hipster Indian fast food place. It has an awesome atmosphere, cool drinks and cool menu, so definitely check it out.

What’s your favorite place in Chicago?

I heard you’re traveling to Dubai later this month. Any exciting activities planned?

I’ve never been there so I’m very excited! I’ve heard it’s a big tourist city with lots to do, so we’ll visit the Burj Khalifa—the tallest building in the world. I’ve never been to the desert so I’m excited to go camelback riding or ATV riding there.

So other than adventurous, what three worlds would friends use to describe you?

If you don’t know me, I’m pretty timid, but once you get to know me I’m pretty loud. So I’d say loud, funny and kind.

Leave us with some words of wisdom—what’s your life philosophy in 140 characters or less?

It could be a cliche, but I’m all about karma. What goes around comes around.