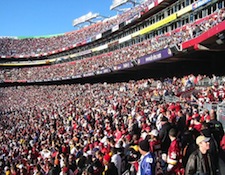 According to a recent study, sports fans are consuming news and highlights through social media and mobile devices more than ever.

The sports media group Perform surveyed more than 1,000 adult American sports fans during February and March and found that 26 percent of sports fans use social media to follow leagues, teams, and players.

While 51 percent of fans follow teams and leagues, 46 percent follow individual players. Additionally, 48 percent use social media to access video highlights and written articles, and 35 percent tune in to news bits or interviews.

Surprisingly, only 33 percent of fans use Twitter to stay informed about their favorite sports teams. Eighty-nine percent of fans favor Facebook and 65 percent use YouTube. Showing some promise for the sports niche, 18 percent of those surveyed said they use Google+ to stay updated.

Whether you’re a coach, player, or fan, social media is growing as an important resource for sporting events. If you don’t already have a presence on the social networks mentioned above, you could be missing out on a valuable opportunity.