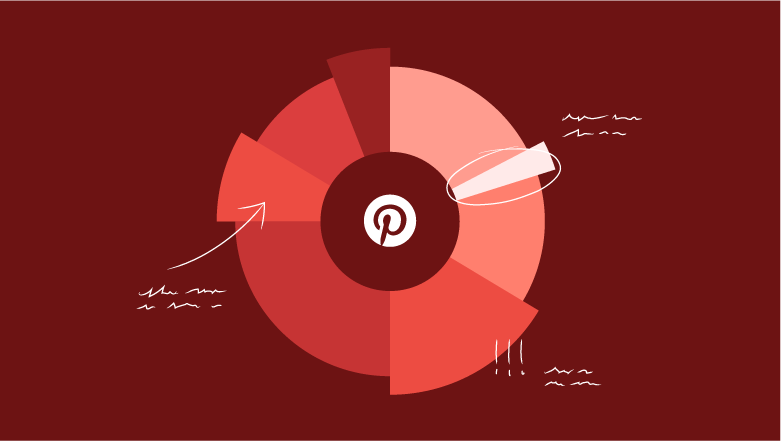 Looking for the latest Pinterest stats? We’ve got you covered!

Because Pinterest doesn’t always get its due credit versus competing social media platforms.

Although it may not have the buzz of TikTok or the massive user base of Instagram, Pinterest remains a potential goldmine for marketers.

Because the platform is one-of-a-kind when it comes to its demographics and high-spending, product-hunting user base.

Thinking about revisiting Pinterest or optimizing your current presence? Your head’s in the right place.

This guide breaks down the Pinterest statistics you need to know for 2022 and beyond.

The reality, though? Activity on the platform has been surprisingly steady.

Pinterest saw a boom during the early days of the pandemic in 2020 when home shopping was at its peak. While activity has cooled off since then, there’s no denying that the platform still boasts a massively dedicated user base.

Don’t let the drop-off fool you.

Again, Pinterest themselves acknowledged that the platform saw higher engagement and growth due to shoppers being home throughout 2020. The platform has held onto a good chunk of those new users regardless.

Although Pinterest may not reach the one billion monthly active user club alongside TikTok anytime soon, 400+ million users are nothing to scoff at. In short, Pinterest’s consistency speaks for itself.

2. Nearly 50% of Pinterest’s total users are classified as “light” users, accessing the platform weekly or monthly versus daily (with only 7.3% considered “heavy” users).

Unlike TikTok or Instagram where users are glued to the platform and checking it multiple times per day, Pinterest is a different story.

Most users check in periodically or on an as-need basis. Given the platform’s emphasis on inspirational and product-focused how-to content versus entertainment, this activity trend makes sense.

The past couple of years isn’t exactly the best barometer for “normal” social media growth.

That said, Pinterest’s 3.1% growth rate is fairly consistent with similar networks (such as Instagram’s 3.7% growth). For reference, these numbers are exponentially better than even more “established” networks than Facebook (0.8%) or Twitter (0.2%).

You’d be surprised. Pinterest represents a unique network in terms of its user base and its diversity. These Pinterest stats are notable for advertisers and brands looking to target the right demographics on the platform.

As noted earlier, Pinterest is about inspiration and education versus entertainment. The platform’s popularity among adults comes from its status as a useful resource versus a place to binge content.

5. 38% of Pinterest users are between the ages of 50 and 64, representing the largest age demographic on the platform.

Although the platform is historically popular among Millennials, the demographics of Pinterest are shifting.

Unlike competing networks, there’s less of a generational divide on Pinterest. In fact, there’s a near-even split among Gen Z, Millennials and Gen Xers on the platform.

Gen Z is likewise having a bit of a moment on Pinterest right now. Consistent with Pinterest’s steady growth, expect to see more and more adopt the platform over time.

7. While women make up 60% Pinterest’s core audience, male users have risen by 40% year over year.

Surprised? According to the latest Pinterest statistics, the platform is no longer dominated solely by Millennial women. Not by a long shot.

Pinterest themselves has been talking up the rise of both male and Gen Z users over the past year or so. This signals how the platform’s identity is evolving (and still has the potential to grow).

8. 80% of men on Pinterest claim that shopping on the platform leads them to “something unexpected” that “surprises and delights them.”

This stat highlights not only how men are using the platform, but how Pinterest at large remains a hub for product research and discovery.

What’s notable here is that the discovery process is not reserved for one demographic. Pinterest has almost become its own sort of search engine for social shoppers.

9. 45% of social users in the US with a household income over $100K are active on Pinterest.

Pinterest’s high-earning demographics are well-documented and are often touted by the platform itself.

This speaks to why the platform is considered a not-so-hidden gem for advertisers. The popularity of content centered around high-end products (think: home goods, furniture) represents a window of opportunity for brands in the right niches.

The way that people use Pinterest is apples and oranges versus other social platforms.

Again, entertainment isn’t what Pinterest is about. Inspiration, education and product research are the names of the game.

And if you see Pinterest as little more than a digital pinboard, you’re missing out on potential marketing opportunities.

The Pinterest stats below can help you fine-tune your marketing strategy and learn how to speak to users on the platform.

Pinterest isn’t shy about putting its emphasis on shopping front and center.

The platform is now a crucial part of the buyer’s journey, even if shoppers aren’t necessarily purchasing from Pinterest directly.

For up-and-coming brands, one of the best ways to use Pinterest for business is to present a sort of digital shop window and personalized experience to win over buyers who’ve never heard of you.

11. 40% of Pinterest users prefer to feel “inspired” during the shopping experience versus shoppers on competing social platforms.

Piggybacking on the points above, Pinterest is a prime place to source ideas for future purchases. For brands that want to actually “inspire” potential buyers, this means matching your photo aesthetics to your target audience.

12. According to Pinterest themselves, Gen Z users adopt new products at 3.7x the rate as Zoomers who aren’t on the platform.

TikTok may be reeling in the younger crowd, but don’t count out Pinterest just yet. This is yet another Pinterest statistic that shows how the platform has cemented itself as a product discovery platform for shoppers of all ages.

13. 83% of weekly Pinterest users make purchases based on the content they see from brands on the platform.

As noted earlier, people aren’t exactly as glued to Pinterest as other platforms. Even so, less frequent use doesn’t necessarily negate the network’s marketing impact on users.

While product research is huge on Pinterest, not that searches and queries aren’t necessarily seeking out brands directly.

As a result, content should feature lifestyle shots, user-generated content and people-focused photos to grab the attention of serial searchers. Keyword targeting and pin optimization matter, too.

15. 85% of Pinterest users say that Pinterest is their go-to social platform to visit when they start a new project.

This statistic showcases the importance of educational content on Pinterest. Infographics and how-to tutorials are all the rage for a reason.

16. 70% of users claim that Pinterest is where they go to find new products, ideas or services they can trust.

The takeaway here is not to just blast content onto the platform. Brands on Pinterest need to have a conscious presence that nurtures buyers, educates them and shows off products in action.

1.7 Pinterest users are 7x more likely to claim the platform is more influential than any other in the purchasing journey.

Pinterest isn’t merely the go-to platform for inspiration and product research — the platform is a huge motivator on the path to purchase.

The effectiveness of Pinterest advertising is proven among big-box businesses and lifestyle brands alike. Let’s look at some Pinterest statistics that highlight the current state of ads on the platform.

Coupled with the behavioral stats above, Pinterest content serves as a place for shoppers to confirm their purchasing decision. Likewise, the fact that ads on the platform mirror organic content is a huge plus.

19. Shoppers on Pinterest spend twice as much monthly than social shoppers on other platforms.

Remember what we said about Pinterest users being big spenders? This stat confirms just as much.

Publishing Pinterest content with a human touch goes hand in hand with higher conversions. This explains the popularity of influencers and UGC on the platform.

But ads are booming right now in a big way. For new brands and those who’ve seen success with Pinterest ads in the past, now’s the time to rethink your budget.

TikTok and Instagram often dominate the conversation around influencers and creators but don’t count out Pinterest as part of the discussion.

23. 80% of weekly users have discovered a new brand or product on Pinterest.

This stat drives home the potential of Pinterest ads in terms of product discovery. If your ad fits seamlessly within a product search by resembling organic content, you’re golden.

24. Pinterest users are 15% more likely to purchase a new product within a week of its launch.

Beyond product discovery, consider that Pinterest is an awesome place for trendspotting. This rings true among brands and consumers alike.

Listen: if your target audience is on Pinterest, the network should remain a top priority for your brand.

These Pinterest statistics signal not only the staying power of Pinterest but its potential opportunities for brands and advertisers when it comes to social shopping.

Not sure how exactly to approach your Pinterest strategy? Want to make sure it fits with the rest of your social presence? Make sure to check out our latest guide on social media campaign management to help you wrangle all of the above!