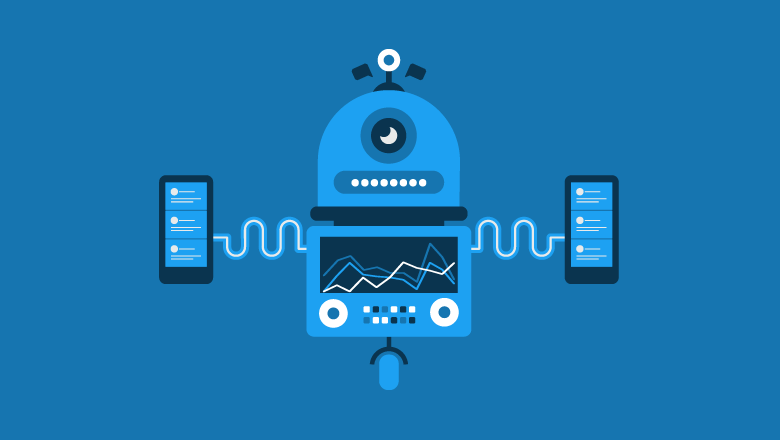 In its early years, like many other social platforms, Twitter presented content in a reverse chronological order that showed the freshest content first. As the user base and feature set of Twitter and these other social platforms grow, there’s too much content to keep up with in a simple chronological order. That’s where the current Twitter algorithm comes in, using different ranking factors to show users posts they think they’ll like.

While this is a plus for users, whenever an algorithm is implemented or updated, it leaves many marketers concerned that the hard work they put into their content and social media strategy is going unnoticed. Changes to the Twitter algorithm are no different, but fortunately there are ways to adjust your strategy and keep up with your social marketing goals.

When Twitter first came out in 2006, it had a simple timeline structure and Tweets were displayed in reverse chronological order from the people you followed.

This was great in the beginning, but as more users joined Twitter, it became nearly impossible to keep up with the thousands of Tweets one user would receive on their timeline in a day. Which is why, as time went on, new algorithms were introduced.

The biggest recent change to the algorithm happened in 2017 with the introduction of the relevance model, and replacing “While You Were Away” with “In Case You Missed It”.

As mentioned above, when you’re following hundreds, or even thousands, of Twitter accounts, it becomes impossible to catch up on all the posts you might have missed after being offline for a period of time. That’s why the changes from the major overhaul in 2017 still continue to resonate today with posts presented to users based on their relevance, determined at a high level by factors like the types of topics and authors that a given user engages with. Like all social media algorithms, the mix of factors identifying relevance is much more complex in practice and is constantly being refined.

Before we dive further into the details of the current Twitter algorithm, it’s important to recognize that:

Sprout helps you keep your social strategy flexible in the face of algorithm changes and evolving trends.

Easy to use reporting lets you hone in on what’s working and where performance is dropping so you can refine your strategy.

Try out all our Twitter management, publishing, scheduling and reporting features with a 30-day free trial.

Learn about other network algorithms

Optimize your cross-network content schedule with our tips for making sense of every social algorithm:

While recency is still a major factor, since a large chunk of the feed is still presented chronologically, the Twitter algorithm does share some common themes with other social algorithms. Twitter’s curation means that content quality and connecting with your followers are still essential ways to help your posts get reach and visibility.

"When I was young and studying cinema, there was a saying that I carved deep into my heart, which is, the most personal is the most creative."

The Twitter timeline is organized into three main sections.

The first section of your timeline doesn’t have a unique header to indicate it’s different from the standard chronological flow of content, but if you check out the time stamps, you’ll notice they vary, indicating that this is where Twitter displays the Tweets its algorithm has ranked as high relevance based on its score system.

Some of these Tweets could include posts from accounts you don’t follow, but were liked or replied to by users you follow and in some cases, users you interact with more than others.

As you scroll past the first group of curated Tweets, you’ll hit the header for the “In Case You Missed It” feature, where the Twitter algorithm presents older Tweets from accounts you frequently engage with. It doesn’t always show up, because it’s meant to only contain a small number of the very most relevant Tweets that you might have missed since your last visit, ordered by their relevance score.

This feature is why the new Twitter algorithm is crucial for brands. Rather than hoping your followers will scroll down far enough to see your last Tweet, Twitter highlights specific posts, making it more likely they will be seen.

The final main section is where your “regular” Twitter feed starts. After seeing all of the Tweets selected by the algorithm as highly relevant, the remaining will show up in reverse chronological order so you will see the latest updates from the people you follow.

A lot of people enjoy the original, chronologically ordered  Twitter timeline, so as of late 2018, the option was added to toggle between seeing the top Tweets first, also known as the algorithm model, and the latest Tweets first, a real-time feed. You can do this by tapping the blue sparkles icon in the top menu.

But not everyone uses Twitter’s real-time feed and many users will prefer getting curated content that lets them catch up faster between visits to the platform. This is why it’s imperative to understand how the new Twitter algorithm works if you want to increase your engagement and following.

Understanding how the Twitter algorithm now works is just the start. In order to get more visibility on your Tweets, you’re going to need to do the work. These tips will help you get set up with some of the essential ways to adapt to the Twitter algorithm and stay flexible when it appears to affect your social media metrics.

A lot of people tend to log on to Twitter for a few minutes a day, sending all of their Tweets at once and engaging with the first few posts they see. For brands, it’s important to maintain an active presence on Twitter throughout the day so your audience has the best chance of seeing your posts. The best way to ensure you have a consistent presence is to get a birds’ eye view of your upcoming publishing calendar with a social media publishing tool like Sprout Social to plan content.

There’s a lot of varying opinions on how many Tweets you should post a day in order to get the most Twitter engagement from your efforts. Which leads into our next tip…

Knowing when the best time to post can be tricky at first because it largely depends on your audience. While you can uncover this through manual review of your performance analytics, we’ve also done the work to help you get an advantage with insights into the best times to post on social media for different networks and industries.

With Sprout’s patented ViralPost technology, you can take your strategy one step further. Our Optimal Send Times feature analyzes the behavior of your specific audience and zeroes in on the top times to post that are specific to your account.

This frees up time to focus on amplifying your strategy by reviewing your success in Twitter analytics tools like Sprout and building on what works for your next campaign.

It’s important to be active on Twitter, but it doesn’t matter how much you post if what you’re posting is pointless.

Posting poor quality content is a sure way to lose followers and hurt your brand. So make sure you’re not just posting something to fill in a time slot, but what you’re posting is relevant, interesting and useful.

In addition to ensuring the quality of your posts is there, consider the type of media the Tweet includes.  Rich media is one of the things the Twitter algorithm considers when ranking content because Twitter users are more likely to engage with it. This includes videos, GIFs, images and even polls.

When you try to decide if #TikTok is right for your brand… https://t.co/q9oUDOmymx pic.twitter.com/zMurwu9txE

However, videos seem to be the way to go if you want to be retweeted. According to Twitter’s online video playbook, videos are six times more likely to be retweeted than photos and three more than GIFs.

The takeaway: Make sure to add rich media to your scheduled Tweets whenever you can.

Knowing how much engagement your Tweets receives impacts the algorithm, it’s important to plan content that encourages users to like, comment and Retweet your posts. Rich media is one way to spark engagement on your Tweets, but there are other ways you can do this, too.

Not all heroes wear capes. pic.twitter.com/dKZmwdLHTv

The Twitter algorithm prioritizes recent content, and engaged users. It’s important to respond to any engagement your Tweet, and even your brand, receives as soon as possible, preferably in the first 2–3 hours.

Using a social media monitoring tool like Sprout Social is a great way to be notified when your brand is mentioned on Twitter, without having to be tagged. You can set up specific brand keywords you want to monitor, so you can stay on top of every post when people mention your products, campaigns and other important brand terms.

If you’re struggling to get organic reach, Twitter’s advertising can be a great way to give your content that extra push it needs. This is particularly great for brands who are just starting out on Twitter to get extra exposure.

Don’t have the budget for ads? Try your hand at some of the non-paid tactics on this list first. If you’re interested, you can learn more about how to run successful Twitter ads here.

The Twitter algorithm ultimately exists to help you, since it’s helping get your post in front of interested audiences rather than buried in a constant flow of new posts. It’s also constantly evolving. As a marketer, understanding how the algorithm works can help you improve your content planning and help you better understand why your posts succeed or fall flat. If you’re looking for some easy ways to start getting organized with taking your Twitter presence to the next level, check out our toolkit of free templates to help audit and analyze your performance.