There’s a major opportunity on the table for British and Irish brands.

Consumers have enthusiastically embraced social media as a part of their everyday lives. They’ve spent the past few years testing the waters. Now, they’re building boats and setting sail. This rapid advancement in consumer social sophistication can be a game-changer for businesses—as long as they know how to keep up.

Over the past two years, businesses in the UK and Ireland have seen a transformative shift in social media usage, acceptance and ability. While both marketers and consumers have advanced in sophistication, consumers are taking a clear lead. 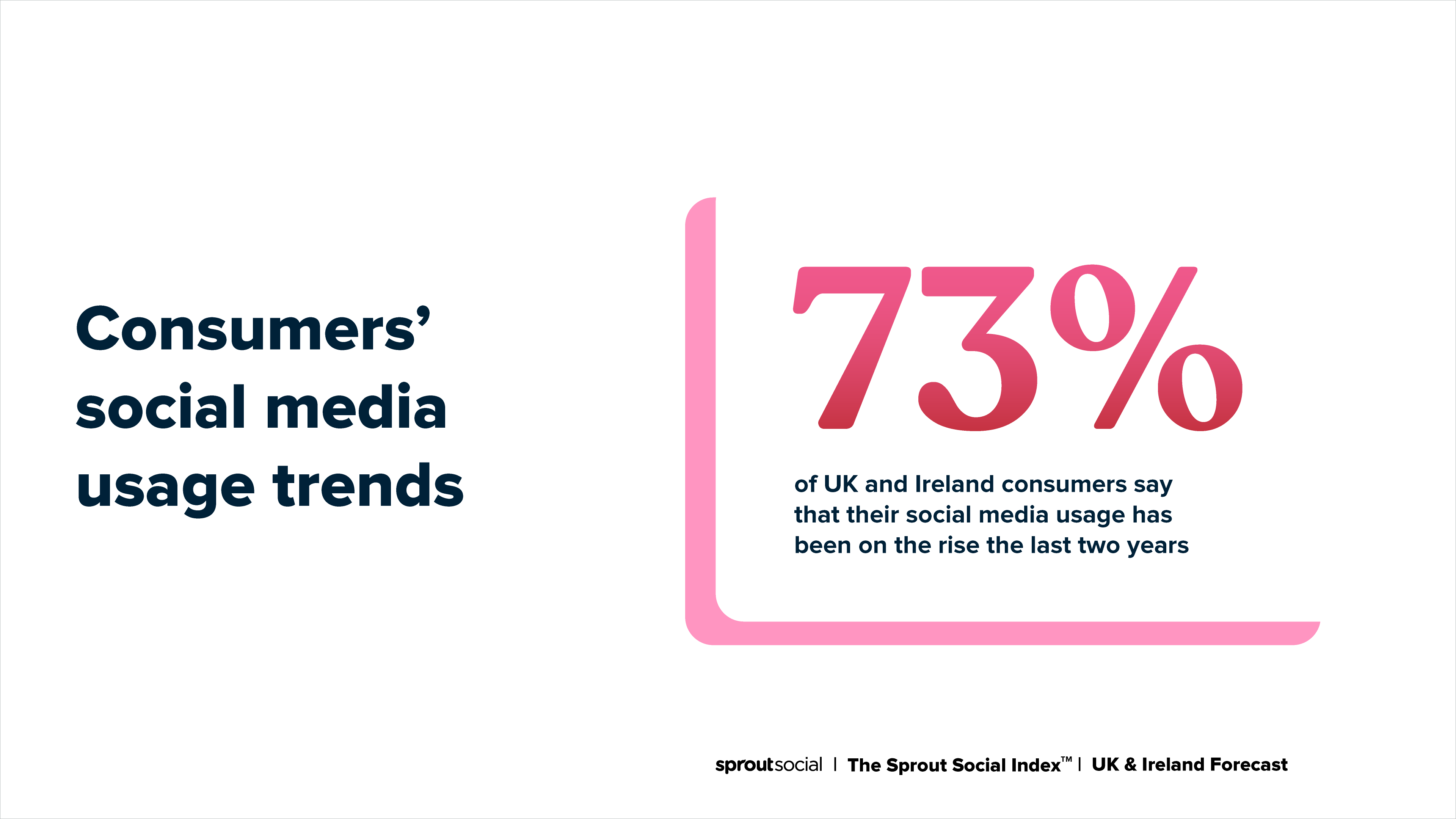 The COVID-19 pandemic accelerated trends that were already in motion before lockdowns and social distancing mandates. Now, consumers are rebuilding their new normal with social at the centre. Their usage is even beginning to outpace their counterparts across the pond. More than one-third (37%) of British and Irish consumers say they spend over two hours on social a day, compared to 31% of consumers in the US.

Consumer social media maturity is trending up and to the right, and marketers have the internal buy-in needed to invest in the channel. Still, that doesn’t mean the path to success is without hurdles. To truly capitalise on the opportunities available, marketers will need more resources to help them connect the dots between social and revenue. 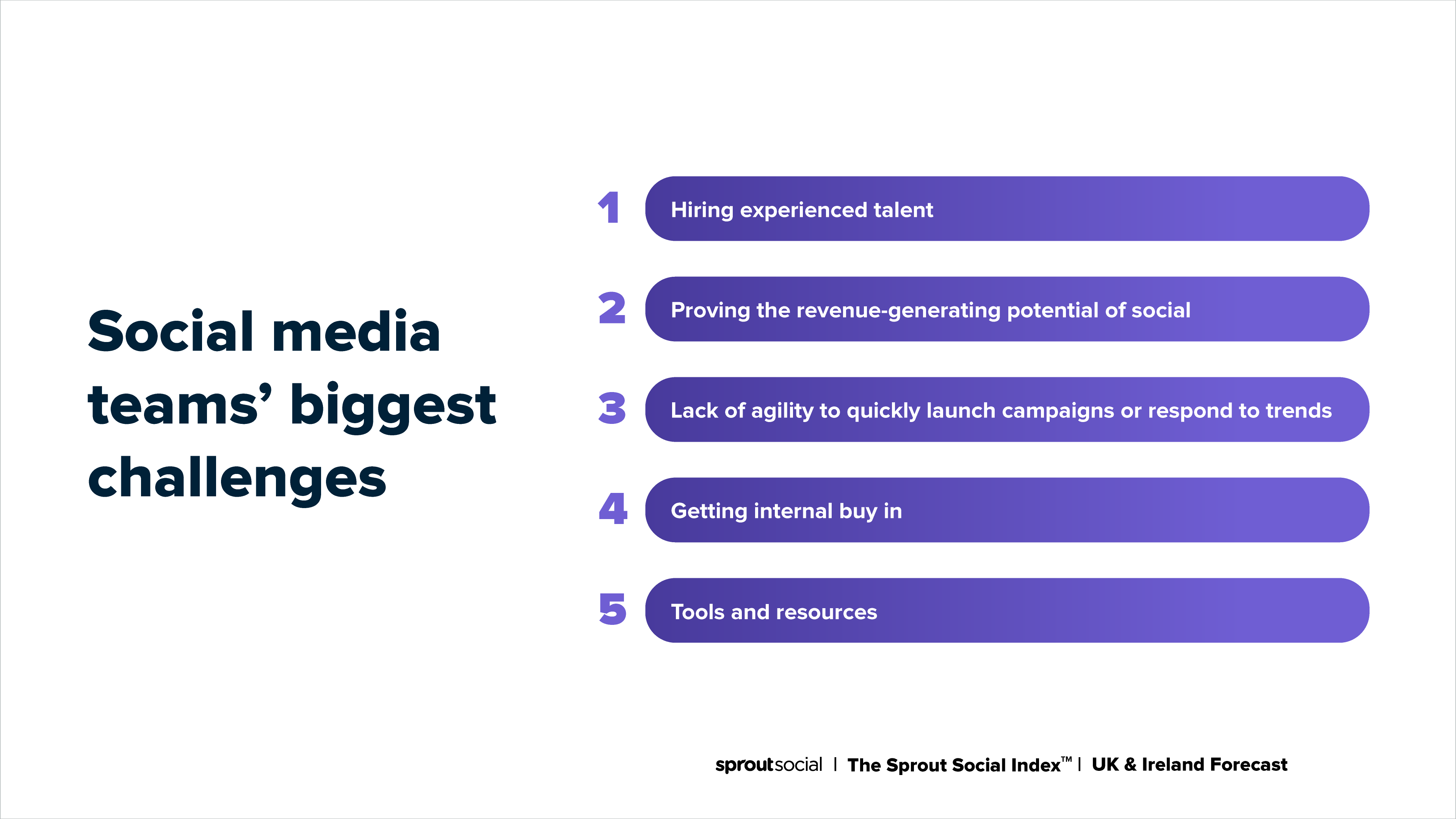 The most pressing resource needed is talent. If you’ve attempted to fill an open role over the past year, that probably comes as no surprise. Labour and skill shortages have created an intensely competitive job market across all industries.

But those hiring for social roles face a unique conundrum. The pandemic allowed consumer social sophistication to flourish while stifling opportunities for would-be social media professionals. Now, businesses have an urgent need to build out their teams in order to meet consumer expectations.

Some are approaching this issue by restructuring their marketing teams entirely. It may sound like a bold move but many were likely forced to downsize over the course of the pandemic. Now, departments are being rebuilt from scratch with entirely new requirements—a task that is incredibly difficult to navigate in today’s competitive hiring market.

In spite of these challenges, businesses aren’t totally out of luck. There are many ways to gain social media experience beyond the traditional “school-internship-job” career path. Marketers looking to expand their teams must be willing to rethink their standard social media manager job description to find the hidden pockets of talent that can take their brand to the next level.

As businesses ramp up their social teams and processes, prioritisation will be key. For the most part, British and Irish marketers are focusing on the platforms their customers care about. In some areas, they’re just a few tweaks away from total alignment. 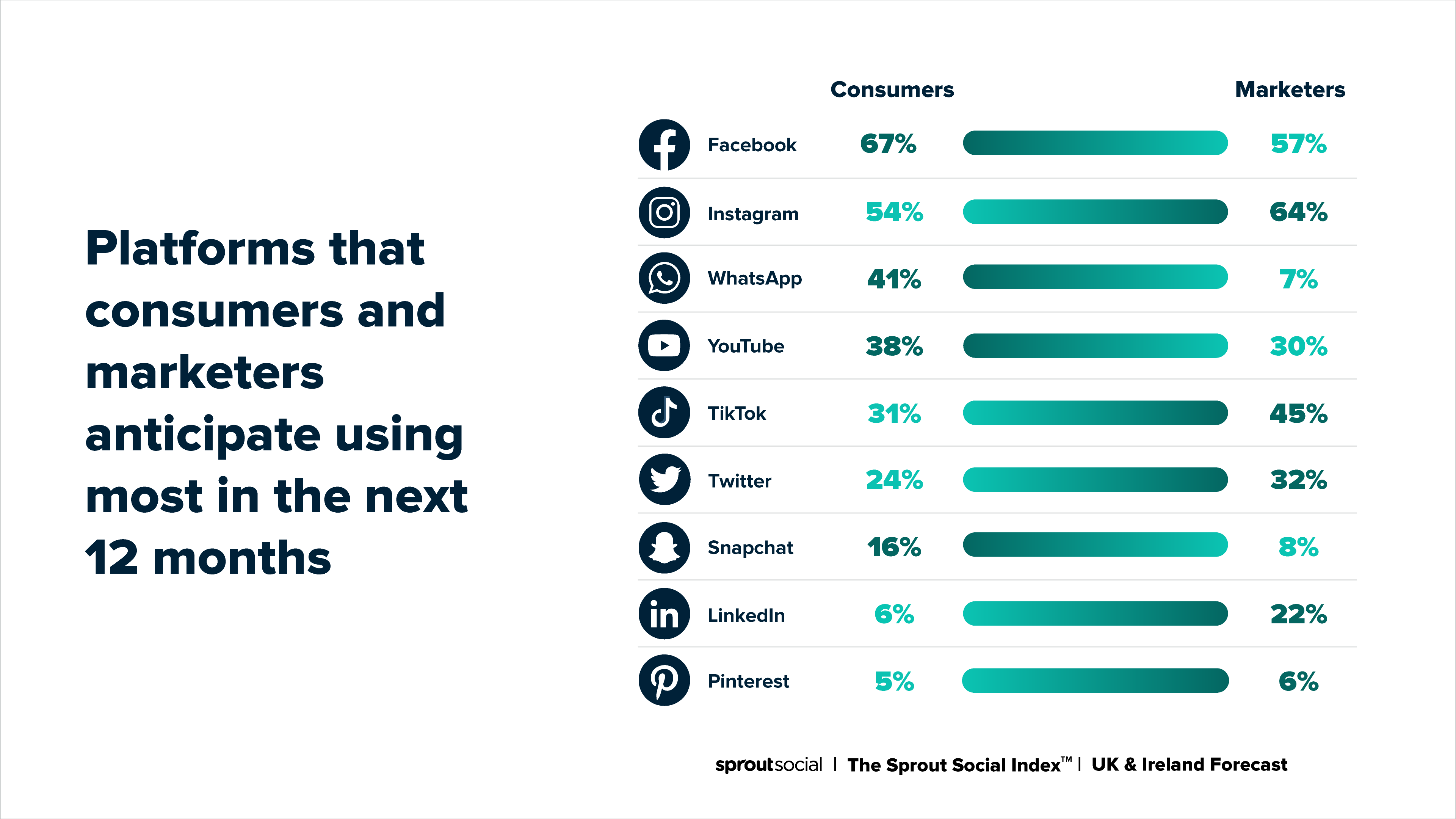 Both marketers and consumers rank Facebook, Instagram and YouTube as the top three networks they anticipate using the most over the next 12 months. Across all three networks, the divide between consumer and marketer usage is 10% or less. Marketers can bridge these narrow gaps by reallocating some effort toward Facebook and YouTube strategies.

The biggest divide between consumer and marketer social media usage is happening on WhatsApp. The messaging platform accounts for a significant amount of consumer activity, but only 7% of marketers anticipate using it over the next year. If marketers only view WhatsApp as a place to connect with friends and family, they’re missing out on an opportunity to provide a superior customer care experience.

During the height of the COVID-19 pandemic, Lidl launched its WhatsApp presence to help customers identify quieter times for in-store shopping. The discount supermarket found success with this model and soon expanded their strategy to meet the needs of on-the-go shoppers looking for quick customer service. Now, they’re able to provide support for everyday queries in 30 minutes or less. 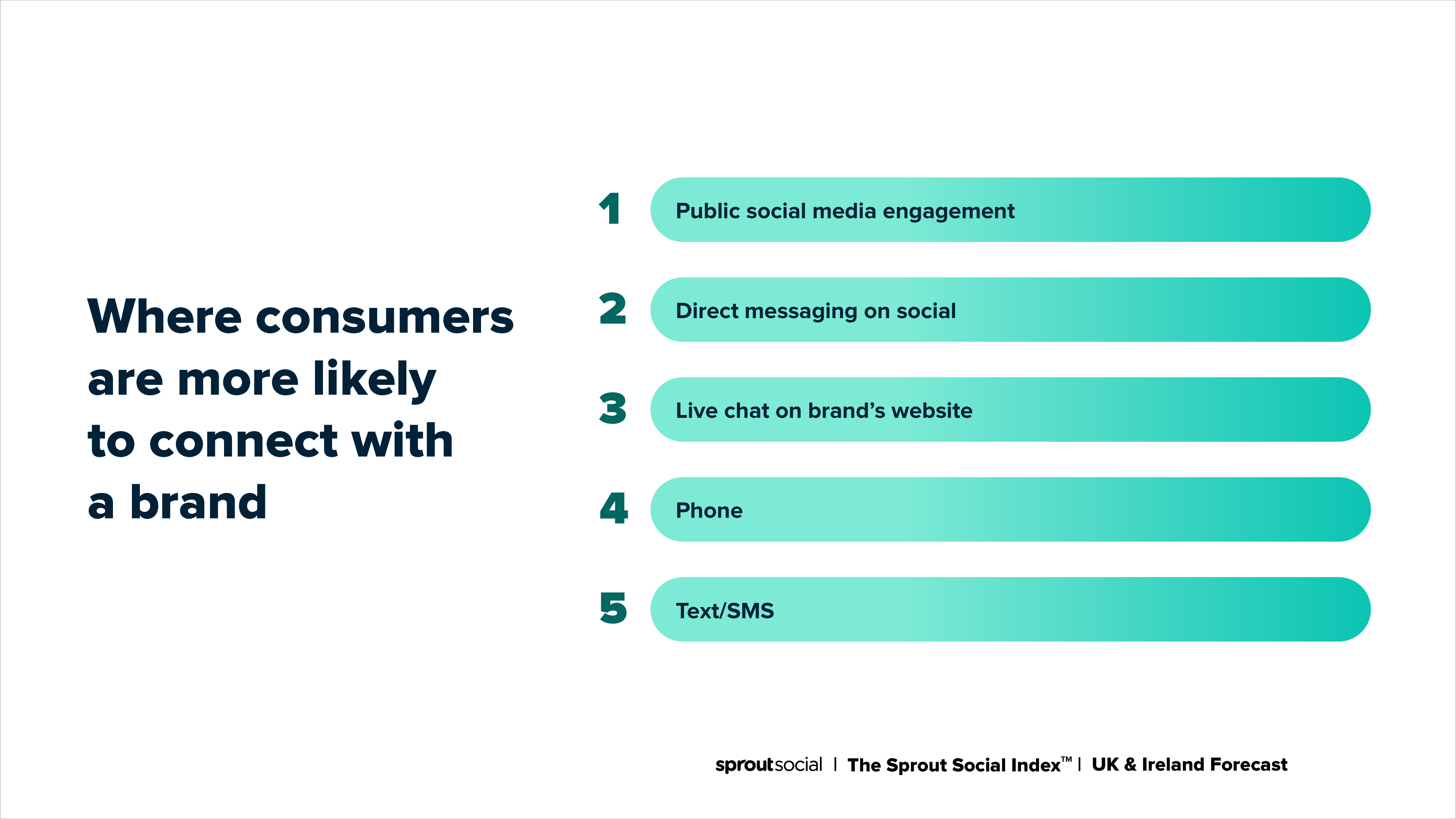 This is in line with the expectations of British and Irish consumers, who are most likely to connect with brands via public social engagements, direct messages (DMs) and live chats. Phone support comes in fourth, which signals full consumer adoption of digital channels for customer care.

Being where your customers are is only half the battle. You also need to know what they want from you once you get there. British and Irish marketers are making big bets that this will involve virtual reality (VR), augmented reality (AR) and metaverse technology. Consumers aren’t so sure. 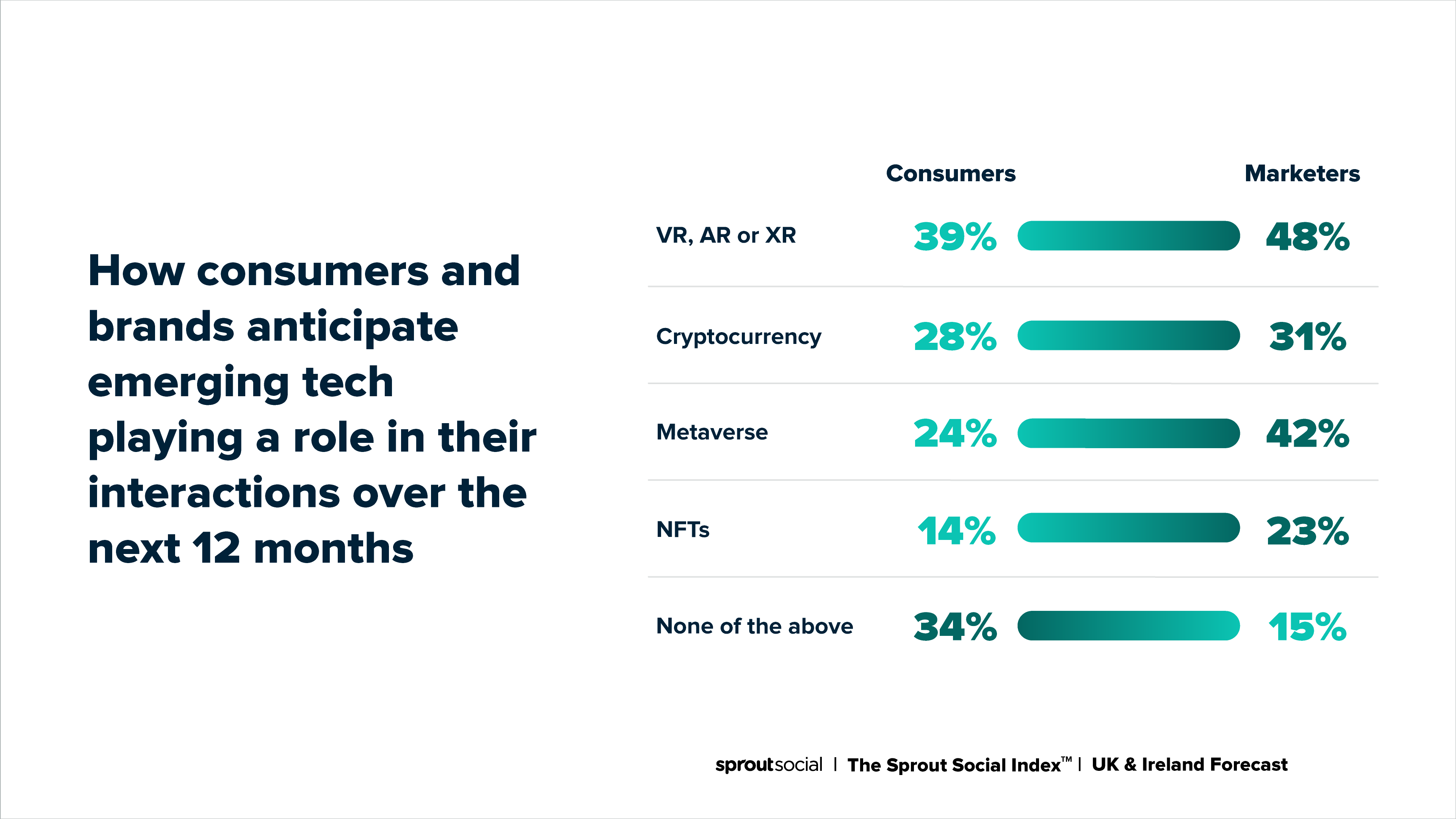 This disconnect is most evident in spending plans. More than two-thirds of marketers (67%) anticipate investing at least a quarter of their budgets into an AR/VR/metaverse social strategy over the next 12 months. However, only 39% of consumers anticipate these technologies will play a role in how they engage with brands over the next year.

While this does show a misalignment, it can also provide marketers with some much-needed stress relief. Rather than attempting to master emerging technologies, businesses should stay laser-focused on nailing social media basics. Whether that’s refining network strategies or lowering your time to first response, mastering the fundamentals can build loyalty with social-savvy consumers. 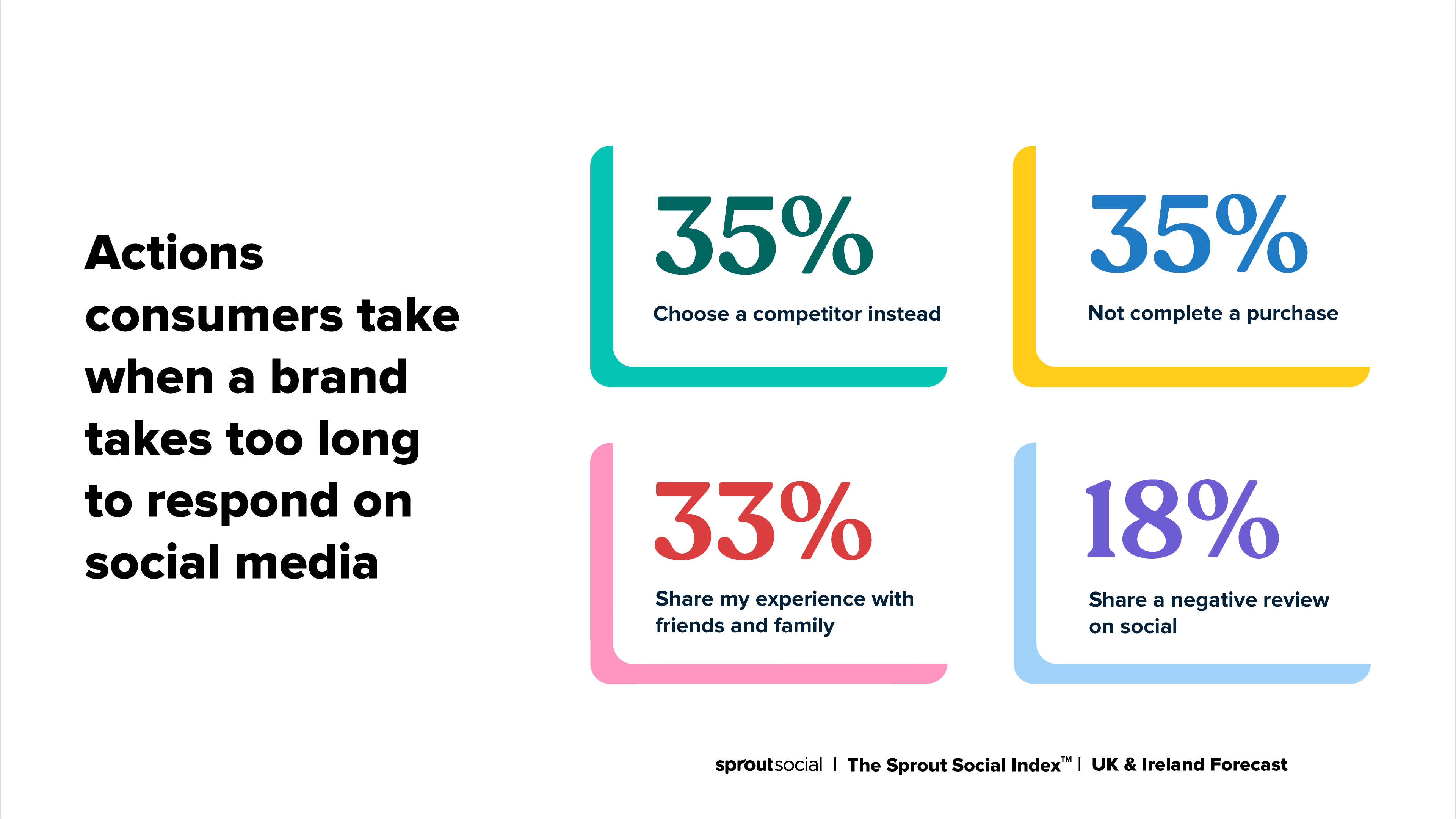 If there’s anything British and Irish marketers can’t afford to miss, it’s opportunities to build up customer loyalty. As it currently stands, businesses face swift consequences when they fail to meet consumer engagement expectations. Not responding in a timely fashion on social drives over a third (35%) of consumers to choose a competitor instead. The lesson here is clear: Just because someone follows you on social, doesn’t mean they’re faithful to your brand.

With the UK and Ireland’s accelerated use of social media, it’s evident that brands have had less time to build brand loyalty. Arguably, as a concept, brand loyalty is something that simply isn’t as ingrained in our culture as much as it is in the US. With that in mind, brands wishing to successfully engage with, retain and ultimately do business with UK and Irish consumers need to understand that expectations are high. The margins for error are slim, and the losses are potentially much greater for your brand.
Gerard Murnaghan
Vice President & General Manager, EMEA, Sprout Social

Thankfully, social media response times largely line up with consumer expectations. As consumer social media usage continues to increase, marketers will have to stay on top of an increasing number of inbound messages. Perfecting an engagement strategy today can set businesses up for more loyal customers tomorrow.

Engagement isn’t the only way to foster customer loyalty. If you want to create stronger connections with your audience, brand building is the way to go. 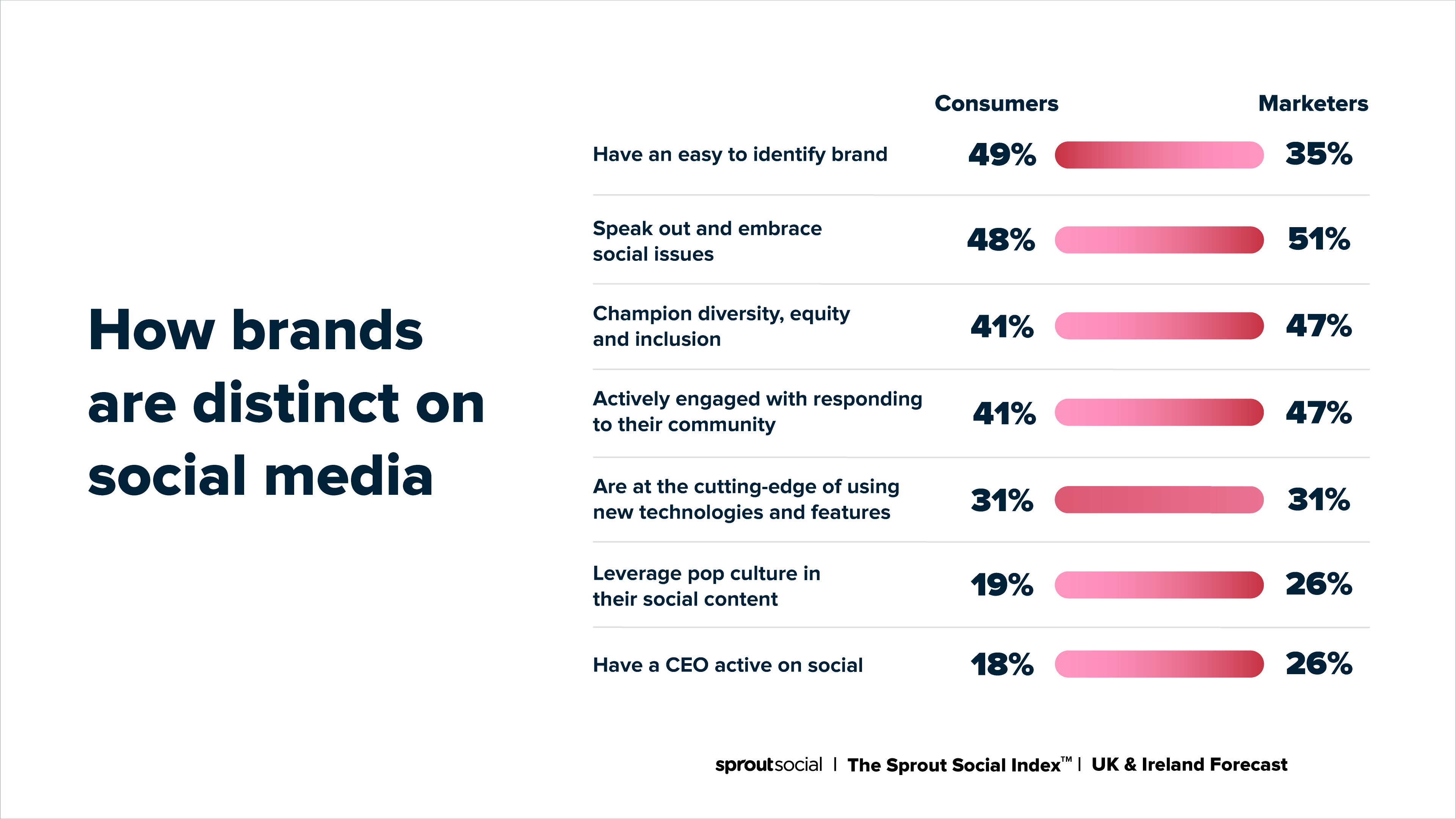 Consumers rank having a recognisable brand as the most important factor in being distinct on social media. Marketers, however, place more importance on embracing social issues (51%), championing diversity, equity and inclusion (47%), and engaging with their community (47%).

That’s not to say that consumers don’t care if brands take a stand or not. Many simply expect it at this point. Most British and Irish consumers (81%) either agree or strongly agree that it’s important for brands to raise awareness and speak out on sensitive topics. It’s more important in the UK and Ireland than it is in the US, where only 71% of consumers feel the same. 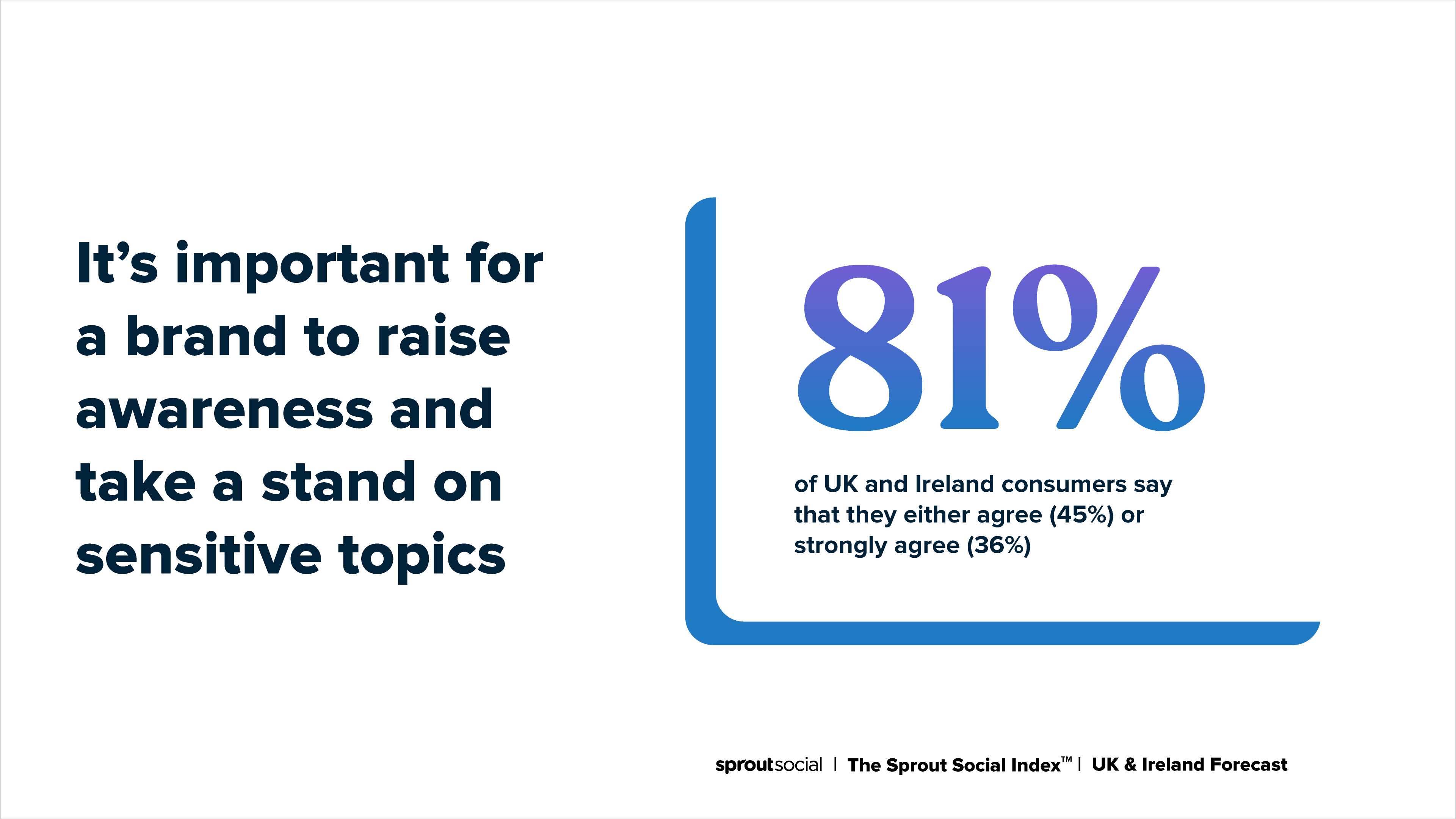 So what goes into creating a recognisable brand? Ask Rich Myers. His Leeds-based bakery, Get Baked received a near-overwhelming amount of attention after it was reported to a local Trading Standards agency over the use illegal sprinkles. “Sprinklegate” quickly became a viral sensation, taking Get Baked’s Instagram following from 4,000 to 68,000.

While it was the controversy that initially attracted the new followers, Myer’s commitment to Get Baked’s unique brand is what turned them into fans. Even in the height of the sprinkles scandal, Myers stuck with the dry, genuine, snarky tone that the brand built its original presence on. This raw authenticity was enough to endear the Get Baked community through the crisis and beyond.

Consistent language and visuals can help consumers easily identify your accounts in their crowded feeds. Pair that with an emphasis on diversity, equity and inclusion, and marketers can start creating stronger connections with your audience at scale.

As networks and preferences continue to evolve, one thing is clear. Social data is the most effective—if not only—way to proactively keep up with digital-first consumers. 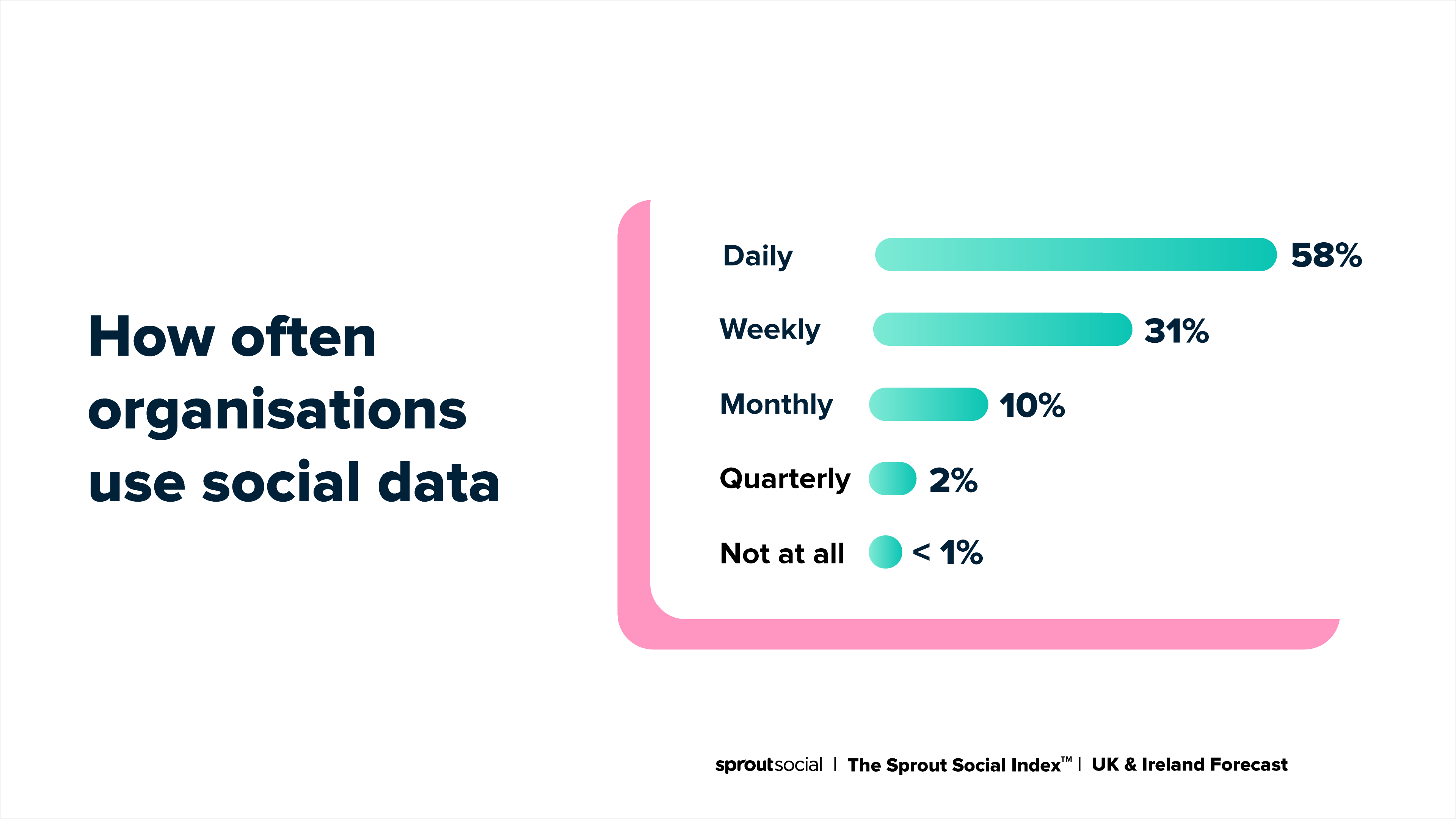 These insights will prove vital as social commerce functionality continues to roll out across networks. The throughlines that connect likes, comments and social media chatter to real, measurable revenue are cementing. Understanding what your customers want from your content doesn’t just impact your social strategy. It will soon impact your bottom line as well.

The London-headquartered clothing retailer River Island is way ahead of the curve when it comes to using social data for real-time insights. Their team relies on Sprout Social to track some of their popular brand hashtags alongside keywords like, “love,” “need,” “want” and “buy” to better understand consumer purchase intent. This rich social data fuels both content decisions and overarching campaign strategy. 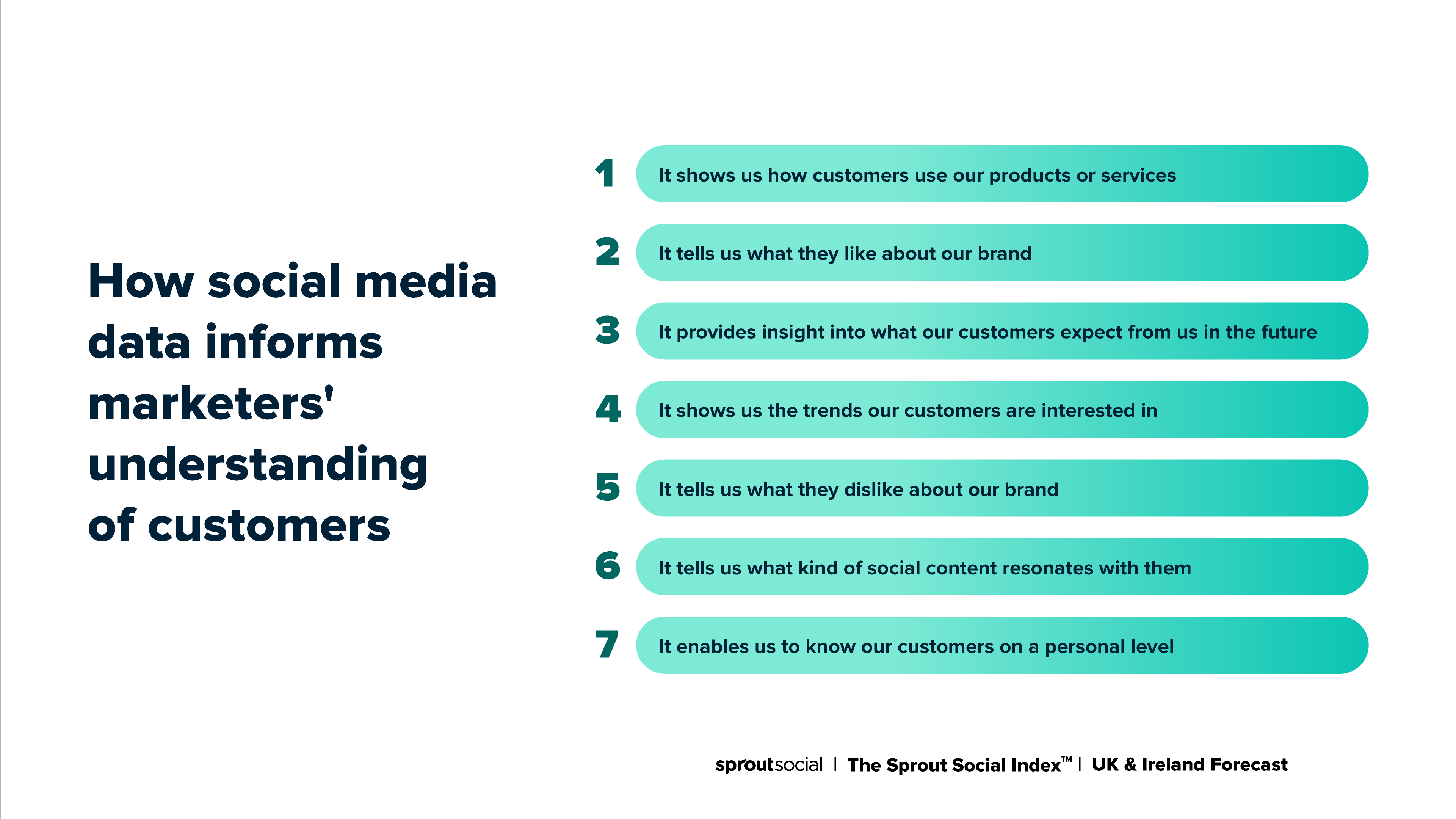 This deep analysis can’t be completed with a few one-and-done performance reports. Consumer social media sophistication is moving too quickly for things to be that simple. To stay ahead of the curve, British and Irish marketers need to embrace the new data-driven standards for proactive decision making: social listening and creative testing.

Combined, these tools can help marketers narrow in on the messaging, creative and distribution strategies that work best for their audience. These insights can be applied across channels, supporting the data-driven decisions that will bring British and Irish businesses into the new era of marketing.

British and Irish businesses can’t afford to ignore the importance of social media any longer. If you want to follow your customers’ lead, then social is your map. It will guide you through evolving preferences, rising standards and changing values. The brands that keep this map close will be the ones to beat in 2022 and beyond.

As you deepen your use of social insights, you’ll soon find that the options for refining your strategy are limitless. Seizing your social moment is simply a matter of narrowing in on which one makes the most sense for your businesses. Use this social media leadership toolkit to get clear on your goals so you can reach your audience where they’re already waiting for you.

Looking for a powerful solution to help put your new strategy into practice? Start a free, 30-day trial of Sprout Social today

The data referenced was collected as part of Sprout Social’s 2022 Index project. Participants ages 18-75 were recruited by Lucid between February 22 and March 01, 2022 via online survey. Selected UK & Ireland consumers (N = 1,312) were those who use at least one social media platform and follow at least one brand on social media. Consumer information collected includes gender, age, self-reported minutes per day spent on social media, platform usage and other measures of brand engagement. Selected UK & Ireland marketers (N = 505) were those who hold a full-time job in marketing and were involved (i.e., performed the job themselves or managed someone who does) in managing their brand’s social media strategy.