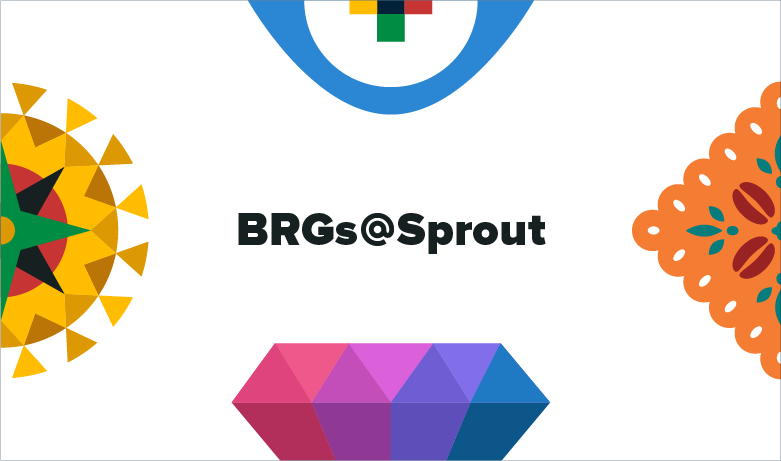 Throughout the course of history, logos have been used to visually communicate the identity of a group or business. From ancient family crests to corporate branding, we use logos to represent who we are and what message we want to share with the world.

In 2018, we refreshed our company values and created a logo system to illustrate our culture, our aspirations and what we stand for as an organization. This visual identity allows everyone at Sprout to seamlessly integrate our values into their work, from using the logos in presentations shared with customers to “reacting” with them as emojis in Slack. These icons remind us to put our values into practice and showcase who we are as a team. In 2020, we applied this same concept to an important initiative at Sprout, our Business Resource Groups (BRGs), which are employee-led groups for traditionally underrepresented communities to come together at Sprout.

I had a chance to sit down with Rusty Cook, Associate Creative Director, and George Mathew, Senior User Experience Designer, to learn more about what goes into creating logo systems and how they captured the identity of each BRG. Read on to learn more and see the end result.

What is a logo system and why was it important for us to develop one for Sprout’s BRGs?

Rusty: A logo system is essentially a family of related logos, kind of like siblings. Each logo represents an individual identity while also sharing characteristics with others in the group. There will be some differences between them, but it should be obvious that they’re all part of the same system. This can include using the same colors or external framing devices. BRGs have a significant impact on Sprout’s culture, and by creating a logo system, our hope was to strengthen each group’s sense of self, as well as increase recognition across the whole company.

Why was it important to involve a user experience (UX) perspective?

George: For this project, it was important to figure out how we could collaborate with every BRG to ensure the logos accurately represented them. I asked myself, “What would help Rusty create these designs and make them feel that they’re able to work intentionally?” Before we could design anything, we needed to first understand the needs and pain points experienced by members of our BRGs. User-based research is one way to do that.

What was the first step in the process?

George: First, we held workshops with the members of each BRG. We asked both specific and open-ended questions to figure out what really made each BRG unique. These discussions allowed us to uncover what was important to each group and what representations would make them feel seen and heard. Part of that included discussing and learning about potentially damaging stereotypes.

Rusty: Our role was to act as translators. We listened to each group’s stories and used our skills to synthesize and visualize them. The challenge was the fact that a logo inherently has to be simple. We were trying to represent underrepresented communities whose history is wrapped up in having their identities flattened and simplified. So a critical element of the process was making sure we stayed away from simplistic representations or even overtly stereotypical ones.

What insights did you learn from those workshops and how did they determine the direction of each logo?

George: The groups shared so many unique stories and symbols that we couldn’t have drawn from our own heads. The reality is that we have our own mental models and they’re limited to our experiences. For example, I didn’t fully understand what “Cafecito” meant, and the workshops gave us a deeper explanation of terms like these, while showing the diversity of backgrounds within each group. The biggest insight for me was that no one was limiting their answers to their own particular struggles. There was a real sense of connection and the desire to build bridges together.

Rusty:While there was a lot of vulnerable discussion about the realities of oppression, many of the stories were about resilience, pride and hope. Having community support around shared identity is one way to survive and/or hopefully thrive against those forces. We had a couple of good conversations where people said, “This symbol totally represents us, but we don’t want to see it in the logo, because outside of the context of being within our community, it may have a different or reductive meaning.”

An example of this was using a pink triangle for LGBTQIA@Sprout. They said, “We’re all about the pink triangle, but we don’t want to see it used to represent us in the corporate context.” It’s important that people have a voice in representing themselves so we know what is and isn’t resonant. Even if you think you’re socially aware, there are going to be things that you might be missing.

As you were drawing up the logos, how did you decide which versions to move forward with?

Rusty: My initial approach was to illustrate scenes from some of the stories that we heard by composing a few visual elements into vignettes. When I shared some early designs with George and our creative team, the feedback was that they could be distilled into one key element. For example, within the vignette for Black@Sprout, the sun was the most compelling element, so I chose to focus solely on that and layer in more meaning from there. In terms of choosing between versions, it’s a mix of intuition and evaluating a range of options for which is most visually balanced. In other cases, I would get feedback from the rest of the team by asking them to identify which one felt most evocative based on the discussions we had with BRGs.

Do you have a logo that stood out to you as a favorite? If so, why?

Rusty: Black@Sprout and Cafecito are my two favorites because of the layers of symbolism in both of them. For Black@Sprout, the shining sun symbolizes life, hope and joy, and the compass embedded in it is the symbol of leadership for “paving the way.” For Cafecito, the Latinx@Sprout BRG, our conversation centered around family, celebration, nature, and abundance. The experience of building community by sharing a cup of coffee was significant to the group, and I was so pleased to find a way to visualize that.

George: I have a number of favorites, it’s hard to pick one! Cafecito is one of my favorites as well, the way in which Rusty integrated the coffee bean and paper flag together is really beautiful and elegant. I also love the Asians@Sprout logo since we were trying to strike that balance of old and new, and the richness of traditions together, which spans a very wide range of Asian cultures. Finally, I do think the Women@Sprout logo turned out really well—our discussions with that group were all about women coming together to help lift each other up. The final product of organic woven fibers instead of linked chains was so well executed, simple and evocative, which is exactly what you try to capture in a logo system.

How has this project changed or influenced your work as designers?

Rusty: For the past two years my boss has said to me, “If you want to grow, one way to do that is to become more data-driven.” And I continued to say, “I’m creative, I don’t really want to study what percentage of people clicked on this versus that.” But going through this process, which heavily relied on research and uncovering data, shifted my perception to realize that human-centric data does in fact resonate with me. I wasn’t just designing in the dark. The results were stronger and more satisfying because it was an inclusive process. I was designing for people I knew and had an emotional investment in creating something that would represent them.

George: I think the whole process of involving the people you’re designing for is exactly how design should be. My top takeaway is how much more impactful and meaningful the work ends up being when it’s people-centric. When design is driven by intention and knowing exactly who your audience is, the end result is more valuable.

What advice would you give to designers who are looking to create a logo system for their company’s BRGs, or other employee groups/initiatives?

Rusty: My advice for anyone else who wants to do this is very simple: talk to the people that you are designing for and create a space to have open and genuine conversations. Listen closely and reflect back what you hear. It will lead you to deeper connections and more meaningful representations.

George: Any design process should begin with curiosity and learning about the people you are making something for. That’s exactly why having a process that allows you to derive meaning is so important. Qualitative insights really help you understand people’s motivations, fears and deeper interests, which is where the rich data comes from.

Learn more about careers at Sprout

To see the BRG logos in action and learn about each group’s mission, check out our Diversity Careers page. If you’re interested in working with us, take a look at our open positions and apply today!