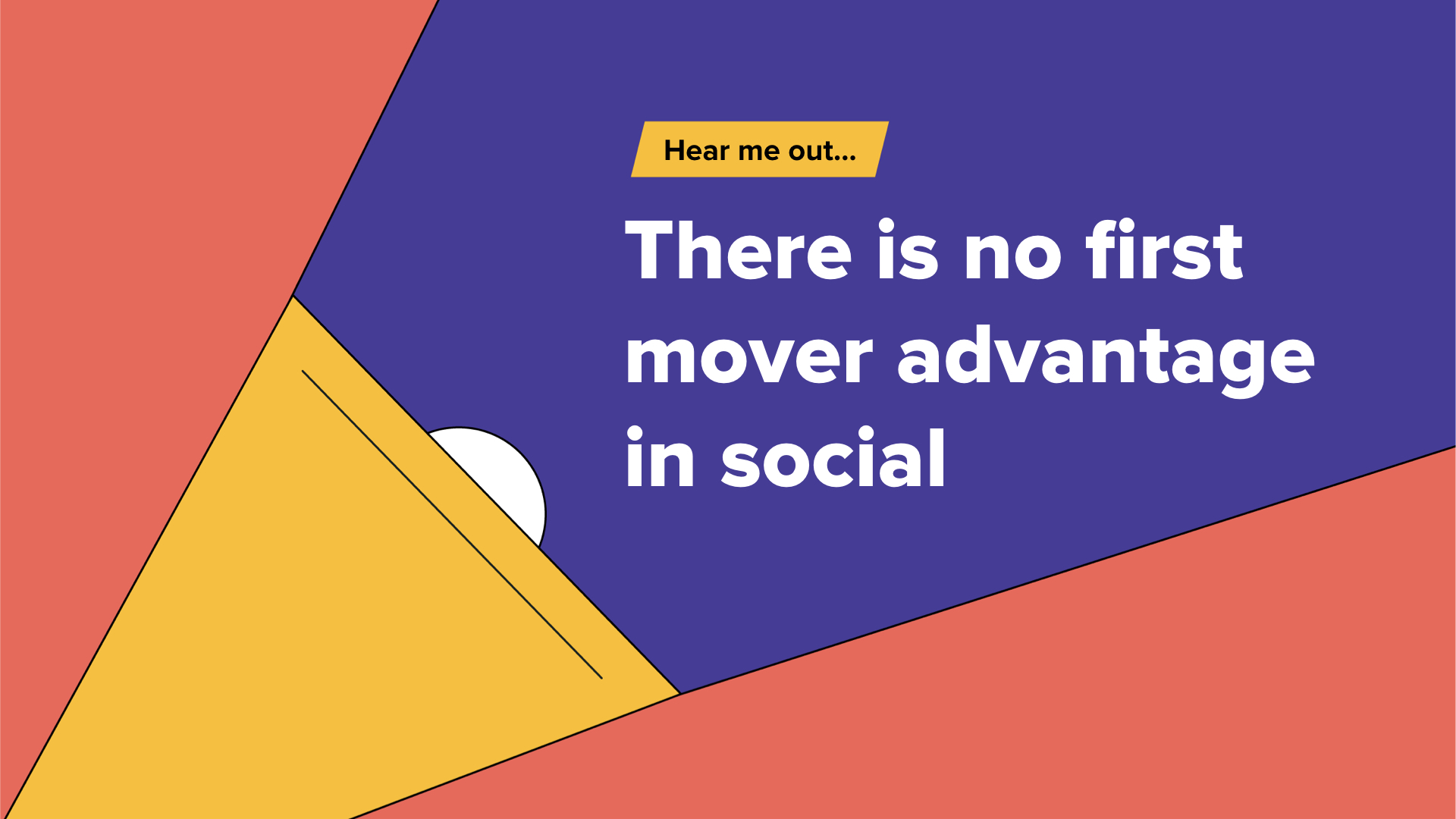 Oscar Wilde said “imitation is the sincerest form of flattery”—and social networks are really taking that quote to heart.

Case in point: it took less than a year for the big names in social to start developing their own audio chat product to compete with rising newcomer, Clubhouse. Facebook is experimenting with audio features, Twitter launched Spaces last December, and even Reddit is pursuing its own Clubhouse clones.

So let me get this straight. Within the past 24 hours, Spotify, LinkedIn, and Slack have all announced that they are building their versions of Clubhouse. Summer 2021 is lining up to be the Summer of Social Audio. https://t.co/jww1FHJ8qh

The reality is nothing that’s new on social lasts forever. Clubhouse struck gold with its unique audio-only format, but it was only a matter of time before one of the more established powerhouses replicated the same feature for themselves.

For social networks, innovation alone doesn’t guarantee competitive advantage. What matters more is who can make the best iteration of a feature that someone else invented.

Nathan Young, Head of Strategy at Deloitte Digital, sums it up best in his Tweet:

I've said it before, I'll say it again: Being first in social is NOT an advantage. https://t.co/V2WNX5JN8q

Consider livestreaming, a feature that’s widely available on most social networks. Before there was Periscope there was Meerkat, an app that amassed nearly two million users during its lifespan. In spite of Meerkat’s popularity, however, a common complaint users shared was most livestream links were already dead by the time they clicked on them. On the other hand, Periscope (a livestreaming app Twitter acquired), allowed for stream playbacks. It was that small feature, in addition to Periscope’s accessibility to Twitter’s entire user base, that ultimately contributed to Meerkat shuttering just a year after launch.

Something similar is playing out with social audio. Clubhouse shot to the top of the app charts because it brought something new to the table. It’s a hit with celebrities and “thought leaders,” has a valuation of $4 billion and more than 10 million app downloads. No wonder why other social networks are eager to jump on this new feature.

Clubhouse has taken off like a rocket in the past year. 10million users and it's clear Social Audio is going to be a huge market with Twitter Spaces, Facebook, and likely LinkedIn jumping on the bandwagon. I get the hype, social audio is amazing. 1/x pic.twitter.com/n8wtXxHKqK

But we know there’s still room for improvement. Clubhouse is only available on iOS, excluding the more than 2.5 billion active Android users around the world. It’s also completely inaccessible for deaf and hard-of-hearing users because there are no captioning or transcript options available.

A5: Right now, Clubhouse isn’t accessible for deaf and hard-of-hearing users. It has no transcript or captioning options. Stories on most platform also can’t be made fully accessible for deaf-blind users because readable text isn’t possible. #ChatAboutBrand https://t.co/GGxE7SC7OS

On the other hand, Twitter Spaces already has the invite-only app beat on a couple of fronts—despite launching several months after Clubhouse’s debut. Spaces is currently available on both iOS and Android, it’s accessible to anyone with a Twitter account and comes with the option to view captions. So while Clubhouse stands out because of its audio-only functionality, it’s fair to question its longevity once established networks find a way to mirror Clubhouse’s features and make them better.

Future case study: what happens to Clubhouse as others add the feature to already established social networks?

Clubhouse is already losing its stickiness for some users and Android users are still not welcome.

Which audio service are you more likely to use?

While a flashy new feature can help social networks initially stand out from the crowd, that competitive edge rarely lasts long. And it’s why networks like Facebook, Twitter and LinkedIn don’t feel compelled to have to release something from scratch every few years to stay relevant.

The social networks with staying power know it’s more important to spend the extra time creating the best version of a product as possible than it is to be the first to market.

Interested in audio content, but not sure where to begin? Check out this article on podcasts and the tips you need to create effective audio content.