Consider this: 7 in 8 social messages to brands go unanswered within 72 hours. Imagine if your customer service team answered only 1 in 8 emails right away, waited more than 3 days to get back with an answer or just flat out failed to pick up the phone 88% of the time. Unacceptable, right? Despite significant gains in the perception and value of social media, many brands remain unmoved in the quest to institute a fully functioning social communication strategy.

According to NewVoiceMedia, poor customer service in the US costs companies $41 billion each year.

Never before has a brand’s responsibility to be responsive and engaged been so critical—and Sprout Social has captured data behind customer expectations that speaks volumes. As open communication with brands shapes a new wave of interaction, the need for social teams to to be active and authentic day in and day out matters more than ever.

In 2013 and 2014, Sprout identified benchmarks and trends in customer engagement across Twitter and Facebook, brought seasonal peaks and valleys to light and shared actionable insights about social habits to help brands meet growing customer demands. In this latest edition, we explore the surging need for faster responses, highlight movement in 15 key industry categories and, for the first time, delve into global data across regions.

Our mission with The Sprout Social Index remains focused on analyzing social data to draw out trends and pinpoint actionable insights that will equip brands to create stronger, longer-lasting customer relationships.

Jump to highlights from The 2015 Sprout Social Index.

Social media is no longer a luxury marketing tactic; it is a necessary business communication channel. Resources—human, financial and technological—are increasingly dedicated to social media efforts at organizations around the world, which, in turn, should improve output. Still, despite these gains and a growing prominence for social in the C-suite, many well-intentioned brands struggle to stay in front of the conversations.

Since the last Sprout Social Index, the volume of messages that people send to brands on social continues to rise. In fact, we calculated that there has been a 21% increase in messages to brands globally, compared to an 18% increase in the US. Increasing message volumes—a trend that has been consistent throughout every iteration of The Sprout Social Index—proves social media continues to assert itself as a primary customer communication channel.

Of all inbound messages, Sprout calculates that 4 in 10 of messages need a response from the brand. That means that customers aren’t just mentioning a business; they are looking for that business to respond and interact with them on social. Similar to overall message volume, the raw number of messages needing a response has increased steadily for the past two years, more than doubling, up 110% since the last Sprout Social Index. This is your chance to strengthen your bond with your customers—and gain a competitive advantage in doing so.

According to Zendesk, 40% of customers switch loyalty because a competitor offers better customer service.

So how have brands responded to this continued uptick? In the last iteration of The Sprout Social Index, we saw a 5% decrease in the response time—a promising sign that brands were making social customer care a priority. But since then, brands have slipped, and response time has increased by 4%, meaning customers are waiting longer to hear back.

Further exacerbating the trend, brand response rates have also decreased by 2.5%. Simply stated: 7 in 8 messages to brands are ignored on social.

But listening provides enormous benefits. In fact, according to a report by Medallia, when certain Best Western properties started responding to more than 50% of their social reviews, they observed twice the occupancy rates as less-engaged properties.

Engage with your customers at every level to establish a deeper emotional connection, using an authentic voice that shows you care about their concerns. 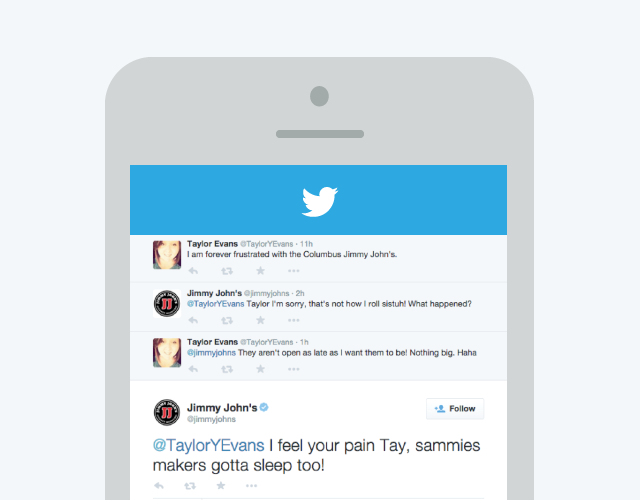 As an ongoing benchmark to our previous reports, The Sprout Social Consumer Engagement Index outlines the industries that receive the most inbound messages requiring attention, and The Sprout Social Brand Engagement Index focuses on how responsive and timely each industry is in interacting with those messages. In the four quarters, there have been some significant shifts in rankings, and we’ve noted the biggest movers, positive and negative.

To determine which industries prioritize engagement over push marketing, consider the differential between the average number of social posts and replies.

This ratio may seem high, but compared to other industries, it is an achievement. For example, media/entertainment (an industry that traditionally lags on the engagement front) sends 8.4 times more posts than replies, and real estate sends 11.7 times as many posts as replies.

This reliance on social media as mostly a broadcasting channel will not work for brands in the long run. Based on the frequency by which people are reaching out to brands on social for answers, a lack of response may lessen a brand’s impact over time as customers begin to see its social efforts as inauthentic.

According to Bain & Company, brands that engage with customers via social earn an average 33 points higher Net Promoter score (a measure of customer loyalty).

Let’s take a deeper dive into when those industries are actually responding and look at both their response times and response rates.

When looking at the industries that are responding, the clear winners are education, utilities and surprisingly, media/entertainment. Media/entertainment is actually neck in neck with utilities for the No. 2 spot in response times; however, that might be due to the fact that they respond to so few messages.

As we’ve already determined earlier in The Sprout Social Index, response rates across all industries are not great. Currently, only 1 in 8 customers looking for a response on social actually gets one from a brand.

That said, there are a few industries that are responding to more messages. Both the utilities and retail industries reply to about 1 in 5 messages requiring a response. In fact, the retail industry took the lead last quarter and now replies to more messages than utilities—a surprising shift based on how much importance the utility industry has put on social customer service.

Not surprising is the media/entertainment industry’s continued trend of ignoring people on social. As a category, it currently responds to only about 8% of messages, but as we mentioned, that 8% is getting a response a little quicker than before, which is a move in the right direction.

Integrate your social media management with a customer service platform, such as Zendesk and UserVoice, so that your teams can assign tasks accordingly and the right people can respond.

Message volume has increased all over the world, but there are some key differences based on what region an organization calls home.

For instance, brands in Asia receive more than 3 times as many messages from customers as brands in Europe, Africa or North America. What’s more, nearly half of those messages actually require response. That means that brands in Asia must not only monitor but also respond to a high volume of messages.

Since the last Sprout Social Index, some interesting trends and patterns by region emerged.

Asia has seen a 92.5% growth in message volume since the last Sprout Social Index—by far the steepest increase worldwide.

The Middle East has actually seen a decline in messages to brands (down 7.5%)—the only global region to experience a decline. But it still saw a 8.9% increase in the amount of messages that require a response. This signifies brands in the region should be even more accountable for responding to those messages (since they’re getting fewer messages overall).

Europe, however, is leading the pack when it comes to response time. Customers of European companies can expect a response 28% quicker than they would if they were speaking with a Middle Eastern organization (the region that is currently the slowest to respond to its customers on social).

So how does each country stack up when it comes to engagement? Looking at both response time and response rate for brands in each region, Europe is leading the pack and is ranked first for engagement, while Asia is down at the bottom, most likely due to the fact that it is hard for brands to keep up with the influx of messages they’ve received lately.

The Sprout Social Index is a report compiled and released by Sprout Social. All referenced data is based on 97K public social profiles (52K Facebook, 45K Twitter) of continually active accounts between Q2 2014 and Q2 2015. More than 200 million messages sent during that time were analyzed for the purposes of this report. Some data from Q1 2013 to Q4 2013 may have shifted from the last Sprout Social Index report due to a shift in the social profiles analyzed; however, all overarching trends remain consistent.

Industry classifications were based on LinkedIn industry categories. In some cases, closely related industries were merged into a single overarching industry. All messages analyzed that were considered casual mentions or not in need of a response were excluded from engagement, response rate and response time calculations with the intention of eliminating noise. Analysis of which messages required attention was done using Sprout’s proprietary technologies, with brands given 72 hours to respond. Response time and response rate calculations were done using Sprout’s Engagement Reporting technology found in The Sprout Social product.

For questions about the Index data, please contact pr@sproutsocial.com.