In August 2015, Adobe and PageFair released a widely publicized study that left advertisers and publishers in a panic. The data revealed that ad blockers were being used by 198 million people worldwide, equating to $22 billion in lost ad revenue.

Shortly after PageFair’s study, Apple released the iOS9 operating system, which allowed mobile ad blockers. The industry had officially been disrupted, and ad blockers were the new enemy.

Contrary to what a quick Google search reveals, the threat of ad blockers isn’t as drastic as studies may suggest, and when properly targeted, display advertising is still effective.

While the trend may have matured, ad blockers are nothing new. PageFair’s report showed that consumers have been using ad blockers since at least 2010.

The recent surge in popularity is just an indication that irrelevant ads are resonating less and consumers have no tolerance for messages that don’t directly address them. In order to adjust to this shift in behavior, brands need to appeal to consumers at every touchpoint and better integrate their content, social media and advertising strategies.

On average, more than 1,700 digital banner ads are served to an individual each month. But only half are ever seen. The same data suggests that, in a typical display campaign, only one in every thousand ads is actually clicked.

No brand wants to be seen as an organization that over saturates the market, especially on digital, where consumers are plugging in for an average of six hours a day.

AdBlock Plus, Blockr and other tools help consumers block static or dynamic banner ads by targeting the characteristics used to deliver ads, such as flash, URL sources and behavioral characteristics.

The simplest ad blockers will remove all banner ads from your desktop or mobile browser, while more complex tools enable people to filter out custom fonts, cookies, images and widgets.

Ad blockers may be making headway, but that’s not deterring businesses from investing in new forms of digital advertising, such as programmatic. Programatic advertising relies on software to buy advertising rather than traditional methods, such as RFPs, personal negotiations and manual insertion orders.

AdExchanger reports that, in 2014, 66% of marketers planned to spend 40% of their digital media budget programmatically. As further proof of digital advertising’s viability, eMarketer predicts that retailers will spend $17.39 billion on paid digital media by 2018. This level of investment is likely linked in part to the fact that mobile ad blockers haven’t necessarily caught on with consumers.

With 52% of digital media time spent on mobile, it’s no surprise that, in 2014, programmatic advertising on mobile alone reached $4.4 billion. Smartphones are here to stay, so brands and publishers are readjusting their strategies and aggressively increasing their budgets to match the demand.

Measure Engagement Before You Invest

Organic reach isn’t dead, but as social media advertising options expand and targeting improves, social ads are becoming a key component of a brand’s digital strategy. Get the most out of your spend by analyzing the organic reach and engagement of social content prior to putting paid dollars behind it.

RAEN Optics, a handmade eyewear designer based in California, applied this tactic to its recent Instagram campaign, #366DaysOfSummer.

Steven Johnson, RAEN’s Digital Marketing Manager, said that the brand initiated the promotion as a way to celebrate the 2016 leap year.

“It’s kind of always summer here in Southern California,” Johnson said. “So we came up with an idea to run a campaign where users would post inspirational summer photos. We pick a winner every day and give away a pair of sunglasses.”

Within a month of launching #366DaysOfSummer, RAEN received more than 5,000 entries. Johnson sorts through all of the submissions using Sprout’s Smart Inbox.

A shortlist of entries are presented to the brand’s creative team, which looks for winning photos that are aesthetically in line with the company’s style guide. Winning submissions are shared across the brand’s social channels and used as paid Instagram advertisements.

Congrats to #366DaysOfSummer Day 44 Winner @jack_antal! — RAEN is giving away a pair of sunglasses every single day this year. — Share your best inspirational summer photos on Instagram and tag @RAEN #366DaysOfSummer. — If your profile is private, we can't see your posts. Learn more, link in profile. #RAEN

Using Sprout’s Instagram Report, RAEN has been able to identify the winning posts that have performed best.

“Through Sprout analytics, we’re able to see our most engaging post,” Johnson said. “We take that into consideration when we’re choosing photos to help advertise the campaign. It’s worked out really well.”

Since starting the campaign in January 2016, RAEN’s Instagram following has increased, engagement has risen and, best of all, sales are up.

One of the benefits of Instagram advertisements like RAEN’s is that consumers don’t find them as disruptive as digital banner ads. According to a study conducted by IPG Media Lab and Sharethrough, native advertisements, such as the ones that appear in social feeds, are viewed 52% more often than banner ads. Also, while users can flag social advertisements they aren’t interested in, they can’t necessarily prevent them from appearing all together with ad blocker tools.

Understand the Impact of Influencers

70% of  Internet users are more receptive to learning about products through content rather than traditional advertising. This means that a content strategy is no longer a nice-to-have; it’s essential. Understand where your audience is present, and enact an advertising strategy that complements your content marketing efforts.

With 6 in 10 global consumers saying that their friends’ posts influence their purchasing decisions, social remains a scalable way to combat ad blockers and distribute organic and paid content to an engaged audience.

Expand your reach, and start attacking ad blockers by tapping into popular influencers within your industry. Integrating your influencer marketing plan into your advertising strategy helps drive brand awareness. Supporting both of your initiatives on social media helps tell a holistic story.

In November 2014, Estée Lauder announced a partnership with Kendall Jenner in a 13-page Vogue spread. The partnership was announced on a Saturday, and by Sunday night, the brand had accumulated 30 million new followers across its Facebook, Instagram and Twitter accounts.

In an interview with The New York Times, Jane Hertzmark Hudis, Group President for the cosmetics company, explained Jenner’s appeal.

“I think what’s so exciting about her is that she has this social media influence along with a fashion credibility in a distinct way that speaks to millennials,” Hertzmark Hudis told the newspaper.

Jenner’s reach can be measured on her personal social profiles, where she regularly posts content that supports Estée Lauder. Take, for instance, the announcement of her partnership, which garnered more than 46,000 comments and 1 million likes on Instagram.

I am super excited to announce that I am the new face of @esteelauder!! check out http://www.esteelauder.com/kendall to see more…I still can't believe it myself! #EsteeModel

Jenner’s ambassadorship expands beyond social. The model has partnered with Estée Lauder to release her own line of limited-edition beauty products and is even featured in the brand’s commercials.

Celebrity influencers aren’t feasible for all brands, and contrary to popular belief, they aren’t even all that necessary. SoulCycle, for example, builds much of its brand around its instructors. From Spotify playlists to employee interviews and candid office photos, all of the material works together to position SoulCycle as a complete lifestyle brand.

Spring is here — so what songs are our instructors listening to? Check out the tunes… https://t.co/c4nRoATuEH pic.twitter.com/38Xd0D4zGT

As an integral part of this social and content strategy, instructors assume the role of brand ambassadors. In turn, the company gets a jolt of personality, which current and prospective customer can engage with in a more meaningful way.

When it comes to engagement, context is key. That means the same channel-first methodology your brand employs with organic social media publishing should be applied to your social ad strategy as well.

Imagine, for instance, that you’re searching Pinterest for summer party ideas. The last thing you probably want to see is a blatant advertisement for garish balloons and silly streamers.

To understand how to marry content with context seamlessly, follow Tito’s Handmade Vodka. On Pinterest, the brand is a master at curating creative recipes for cooking and baking with its signature product—all bolstered by beautiful, pin-worthy photography. 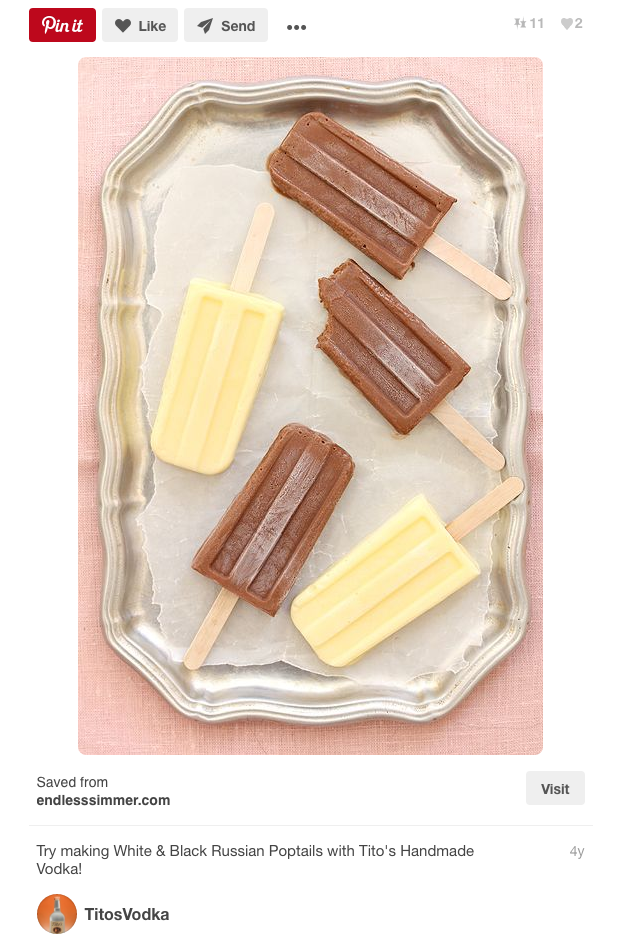 On Instagram, the brand’s aesthetic also matches what audiences are frequently seeking. Tito’s pays homage to its Austin heritage, highlights bartenders who use its vodka and captures its brand events.

There's no place like #Austin #Texas, and we're proud to call it our hometown! Celebrate your #TitosHandmadeVodka pride with this extra soft long sleeve t-shirt. Available now at titosvodka.com/store

Don’t force your digital advertising strategy onto a specific social platform. Instead, let the platform inform and, ultimately, determine your advertising efforts.

A successful digital advertising strategy starts with a cohesive content and social media strategy that’s supported by a well-thought-out and balanced distribution plan. With consistent messaging working in tandem with all digital touch points, your brand is more likely to deliver memorable, effective advertising that people have no desire to ever block.

Erin Nederbo: Erin Nederbo is a Content Specialist at Sprout Social. She enjoys reading short stories and is a staunch proponent of square-cut pizza.