While most brands are preparing for the onslaught of the winter holidays, nonprofits are knee deep in end of year appeals through December 31. And those annual campaigns are on top of the work they’ve just finished to maximize the biggest annual charitable giving day of the year. Since its founding in 2012, Giving Tuesday has grown to become an international day for giving back, drawing millions of participants and donations alike. For perspective, in 2018, nearly four million donors contributed roughly $380 million in donations.

Social media in particular has played a significant role in getting this charitable movement to where it is today. Nonprofits can amplify their causes and mobilize donors to give back to their communities, often starting their awareness campaigns several months in advance. But with so much time and energy invested into Giving Tuesday, it’s easy to forget there are 364 other days that are just as important for nonprofits. Specifically, nonprofits struggle to maintain the momentum generated by Giving Tuesday to keep donors motivated throughout the entire year.

Some critics suggest nonprofits avoid campaigns like Giving Tuesday altogether to prevent putting all their eggs in one basket. I disagree. While it’s true one-off events encourage habits like spot giving, they also provide nonprofits a significant amount of data that contextualizes donor behaviors. As nonprofits look ahead to the new year—and start thinking about their next big campaign—marketers that leverage social data will find new avenues to maintain the excitement and donor enthusiasm usually reserved for Giving Tuesday.

It’s all about connection

Social media remains one of the best possible ways for organizations to reach across demographics, politics and opinions to deliver on its early promises of more principled ideals. And it’s those interactions across social media that enable brands to fuel long-term social strategies that ensure those connections last beyond a single interaction.

A closer look at the annual campaign Giving Tuesday (or #GivingTuesday, as it is popularly known) further exemplifies how nonprofits take advantage of social media’s reach and influence. Founded on themes of connection and bringing people together, Giving Tuesday is the perfect campaign for platforms like Facebook and Twitter. It quickly found footing in the tech space, with audiences first gaining wide exposure to the campaign thanks to promotions from founding partners Skype, Google, Cisco and Microsoft. The stylizing of the cause with a hashtag further built its growth and credibility on social media and today, it’s common to see social media giants match donations from ordinary people.

The cause, however, is not without its detractors. While most people agree Giving Tuesday’s mission comes from the right place, nonprofits often dislike the “spot giving” it encourages. With Giving Tuesday, donors only contribute once annually as opposed to more sustained and regular funding.

But with social listening, nonprofits can turn a one-off event like Giving Tuesday into a year-long campaign. With listening, nonprofits can dive deep into the social conversations around Giving Tuesday and come away with actionable insights to inform their long-term digital strategy. To that end, we used Sprout Social’s listening tool to evaluate social conversations leading up to, during and after Giving Tuesday 2019. While Facebook, Instagram and other platforms are just as important for nonprofits, for the purpose of this article, we’ll be focusing solely on historical data gathered from Twitter.

Reading between the lines

In 2019, Giving Tuesday campaigns generated 825,000 Twitter messages and garnered 1.7 million social engagements and 14.2 billion potential impressions. Trying to dig through that data manually for useful insights is pretty much impossible. But with social listening, nonprofits can easily visualize all their data including topic volume, impressions and engagements. And like a healthy looking EKG, all key social performance metrics experience a consistent and discernible wave pattern by spiking every Tuesday of every month leading up to the actual day. 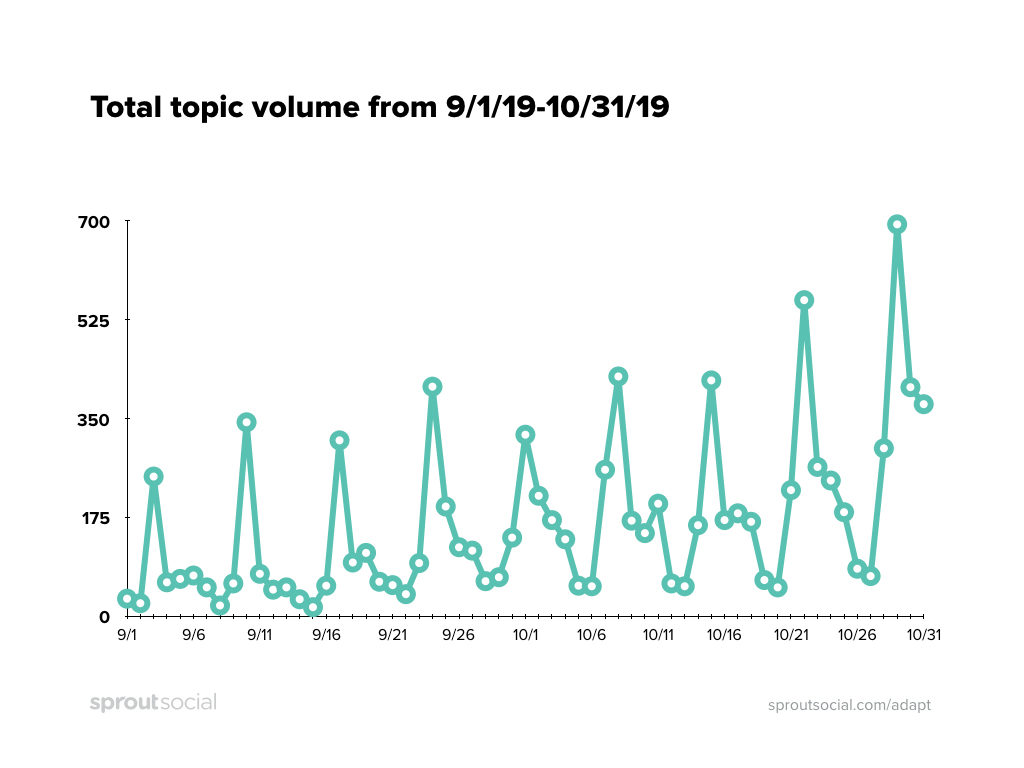 A closer look at the aggregate topic volume on Twitter reveals a more distinguishable pattern of engagement. Contrary to what most people think, Giving Tuesday continues into January at a relatively healthy number, likely due to the halo effect of the holiday season before taking a dip due to the summer doldrums. With listening, however, nonprofits can uncover trends in the Giving Tuesday conversation like hashtags and other terms most commonly associated with their organization. Using this insight, nonprofits can identify opportunities to spark conversations with their donors year-round.

One method is by examining the underlying content found in spikes during the summer. By narrowing our focus to Tuesdays in July for example, we quickly learn that posting regularly on Tuesdays is still a tried and true method for attracting engagement. Also interesting is that many nonprofits with a moderate number of Twitter followers are out-performing some larger ones in terms of engagement in this time period. For lean social teams, it’s a reminder to stay present on every Tuesday regardless of the season.

Word clouds help marketers further peel back the Giving Tuesday onion. Most of us are familiar with this type of graphic representation of an aggregate of trending topics and hashtags arranged in a vaguely cloud shaped pattern. This easily digestible visual reveals the inclusion of complementary hashtags to #GivingTuesday like #CharityTuesday and #TuesdayMotivation results in millions of potential impressions and hundreds of more engagements. Finding these additional content ideas are key to keeping air in the Giving Tuesday balloon year round.

Turning millions of raw data points into something usable starts with segmenting information by what’s most important to your organization. For nonprofits, breaking down data around Giving Tuesday further reveals insights about associated trending words, topics and other keywords related to donations and funding.

The data gets more interesting, though, when we switch to displaying only hashtags. Here we see broader, potential hashtags for organizations to draft off of that may have been previously unknown. Ironically, listening tells us that #BlackFriday and #CyberMonday in conjunction with #GivingTuesday trend well.

Listening can also provide much needed content inspiration for marketers looking to extend the lifespan of a campaign. Adding the word “hunger,” for example, alters the context of Giving Tuesday and we begin to see word associations include things like children, hungry and football. A further examination of these social conversations reveals a number of professional athletes using their platforms to lend support to end hunger-related issues, all insightful in preparing for nonprofit social strategies beyond the holiday season.

In addition to content strategies gleaned from topic data, it can be equally important to understand the “who” behind the trends. With listening, brands can identify influential social users who they could partner with to amplify their message. For Giving Tuesday, celebrities like Lady Gaga and Lin Manuel Miranda generate thousands of impressions and engagements for causes they promote on their platforms. But nonprofits may be surprised to discover bands like Panic! At the Disco and Metallica also garnered high levels of engagement for causes they support. With listening, organizations can identify individuals they might not have thought of to help promote their cause and widen their sphere of influence.

Giving Tuesday continues to be a powerful donation engine for nonprofits. It’s a day nonprofits spend months building up towards to get the most out of a 24-hour donation cycle, with much of the activity taking place on social media. Once the day is over, it’s typically back to business as usual, with many nonprofits struggling to extend the momentum of Giving Tuesday into the new year.

But with social media, and with social listening in particular, these transient moments don’t have to be fleeting. With listening, organizations like nonprofits can hone in on actions, content and individuals to identify key factors driving engagement to fuel their long-term social strategies.

Brian Weimer is the Director of Mid Market Sales at Sprout Social. When not talking about brands, marketing and technology he can be found looking for his keys and or phone. He swears "they were just right here!"
A good competitive intelligence team doesn't just deliver insights for others; they also help others understand what to look for and how to get it on their own. Read More
By Peter Mertens / March 24, 2020
When used to its full extent, social does more than raise awareness and fuel your content strategy. It can also inform every aspect of your business. Read More
By Joe Martin / March 12, 2020
As a brand strategist, don’t just look for the big conversations; look for the right conversations. Read More
By Kristin Johnson / February 28, 2020